US Supreme Court nominee Neil Gorsuch pledged independence from President Donald Trump during his confirmation hearing, as Democratic senators expressed concerns he would be beholden to the man who selected him.

Answering questions during a more than 11-hour session on the second day of his Senate Judiciary Committee hearing on Tuesday, Gorsuch said Trump never asked him to overturn the 1973 Supreme Court ruling legalising abortion nationwide, saying if the Republican president had done so, “I would have walked out the door”.

Trump promised during last year’s presidential campaign to appoint an anti-abortion justice who would overturn the landmark Roe v Wade ruling, which many conservatives want reversed.

If confirmed by the Senate as expected to fill a 13-month-old vacancy, Gorsuch would restore the nine-seat court’s conservative majority at a time when Republicans control Congress and the White House.

But the conservative federal appeals court judge from Colorado repeatedly said he was beyond politics.

“When I became a judge, they gave me a gavel not a rubber stamp,” Gorsuch said. “I am my own man,” he added.

Trump has assailed the judiciary both as a candidate and since taking office on January 20. He condemned federal judges who put on hold his two executive orders to ban the entry into the United States of people from several Muslim-majority countries, calling one a “so-called judge” and suggesting that blame for a future terrorist attack should go to the courts.

“When anyone criticises the honesty or integrity or the motives of a federal judge, well I find that disheartening, I find that demoralising, because I know the truth,” Gorsuch said.

When Democratic Senator Richard Blumenthal asked if that included Trump, Gorsuch said, “Anyone is anyone.”

Trump indicated in a speech on Tuesday night that his approach was unlikely to change.

“The courts are not helping us, to be honest, it’s ridiculous,” he said.

Republicans have praised Gorsuch, 49, as highly qualified for a lifetime appointment as a justice.

Democrats, who have slim chances of blocking his nomination, have questioned his suitability, with some portraying him as favouring corporate interests and insufficiently independent from Trump.

Al Jazeera’s Mike Hanna, reporting from Washington, DC, said Gorsuch’s testimony may have swayed a number of Democrats. But there are still a substantial number of Democrats who are angry at the fact that former president Barack Obama’s choice as Supreme Court judge, Merrick Garland, was never given the opportunity of a hearing by the Republicans last year.

“Some of the Democrat senators have made very clear that regardless of Neil Gorsuch’s abilities, they will fight every attempt to get him approved,” our correspondent said. “In the Supreme Court justice appointment, you need 60 votes in the Senate. That means the Republicans need to get a number of Democrats to vote with them if Neil Gorsuch is to be approved.”

Republicans hold 54 seats in the Senate.

‘Nobody above the law’

Democrats probed Gorsuch on whether he would be willing to hold Trump accountable. Asked by Senator Patrick Leahy whether a president has the power to violate a law on surveillance of Americans, Gorsuch said, “Nobody is above the law in this country, and that includes the president of the United States.”

Republican Senator Lindsey Graham said if Trump resumes the use of waterboarding, a prohibited form of simulated drowning, on detainees, he “may get impeached.” Gorsuch said he would not speculate on whether Trump could be prosecuted if he authorised waterboarding, but repeated, “No man is above the law.”

Gorsuch refused to offer his opinion of Trump’s travel ban, saying it was an ongoing case.

Democrat Senator Richard Durbin pressed Gorsuch on claims by a former student at the University of Colorado Law School who said Gorsuch implied in a legal ethics class in April that he believes many female job applicants unfairly manipulate companies by hiding plans to begin families. She remembered him saying that many accept job offers but quickly leave with maternity benefits.

“Those are not my words and I would never have said them,” Gorsuch said. He later said he was trying to teach students about inappropriate questions from prospective employers, not endorsing such inquiries. 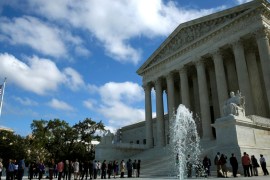 Why the Supreme Court is a key US election issue

The appointment of federal justices is arguably the most lasting legacy of any president. 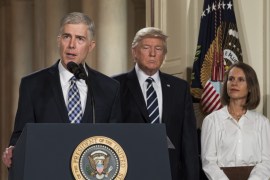