Basque separatist group ETA will fully disarm by April 8, a French environmental activist with ties to the Basque community promised on Friday.

The group announced a permanent ceasefire in 2011, but the governments of Spain and France have so far refused to take part in its disarmament because ETA tied it to the future of its members, both in and out of jail.

The two countries have demanded that ETA lay down its weapons without conditions and disband.

Txetx Etcheverry, a prominent figure in the French Basque community who tried to arrange a disarmament in 2016, told AP news agency that the new initiative was agreed upon with the ETA and will be carried out whether French authorities agree to receive the weapons or not.

“If the French government doesn’t take responsibility, the Basque civil society will take a step forward. We can’t imagine five more years of inaction,” Etcheverry said, pledging that “ETA will be disarmed by midnight on April 8.”

READ MORE: Basque group ETA to put weapons ‘out of use’

ETA, which in Basque stands for “Basque Country and Freedom,” was founded in 1959 during the Spanish dictatorship of General Francisco Franco.

It has killed 829 people in its nearly four-decade campaign to create a Basque homeland in a region straddling northern Spain and southwest France.

The group was most violent in the 1980s, staging hundreds of shootings of police, politicians and businesspeople.

One year after its last deadly attack, the killing of a French police officer near Paris in March 2010, the ETA announced it was renouncing violence.

In recent years, police operations have weakened the ETA. If the disarmament were completed, it would primarily be symbolic, given that the group’s reduced arsenal is believed to be obsolete.

ETA has linked its total dissolution to allowing imprisoned members to serve their sentences closer to home in northern Spain, among other demands.

But on Friday, Prime Minister Mariano Rajoy rejected any concessions.

“ETA has chosen to disarm unilaterally. It should do it and should also disband,” Rajoy, who leads Spain’s conservative Popular Party, said at a party meeting.

“The government of Spain will do what it has always done – to apply the law, which is the same for everybody.” 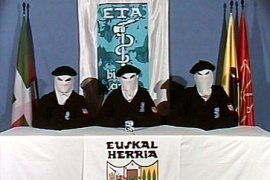 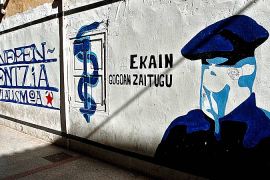