US President Donald Trump is seeking to reduce his country’s contribution to United Nations programmes, as part of cuts to funding of US diplomacy and foreign aid in his administration’s budget proposal.

The spokesman for UN chief Antonio Guterres reacted fiercely to the plans on Thursday, saying “abrupt funding cuts can force the adoption of ad hoc measures that will undermine the impact of longer-term reform efforts”.

In its budget the Trump administration stated its intention to “reduce or end funding for international organisations whose missions do not substantially advance US foreign policy interests”.

This includes slashing funding for the State Department and USAID, its foreign aid agency, and shifting money towards the military with a $54bn increase in defence spending

“The secretary-general fully subscribes to the necessity to effectively combat terrorism but believes that it requires more than military spending,” spokesman Stephane Dujarric  said.

“There is also a need to address the underlying drivers of terrorism through continuing investments in conflict prevention, conflict resolution, countering violent extremism, peacekeeping, peace-building, sustainable and inclusive development, the enhancement and respect of human rights, and timely responses to humanitarian crises.”

The United States spends about $10bn a year on the UN. That is about 22 percent of the world body’s total budget. It contributes 28 percent of the peacekeeping budget.

The US government has not released a figure, but is reportedly looking at cutting up to half of its funding.

Trump’s budget proposal has been criticised by Democrats and even some Republicans, including Senator Lindsey Graham who called it “dead on arrival” and predicted that it will not get approved by Congress.

The UN said recently that the world is facing its worst humanitarian crisis since the end of World War II, with 20 million people in Yemen, South Sudan, Somalia and Nigeria facing starvation and famine

At a briefing at the White House, Al Jazeera’s James Bays asked Trump’s budget director whether the administration was worried that some of the most vulnerable people on Earth would suffer as a result of proposed cuts to foreign aid.

“We’re absolutely reducing funding to the UN and to the various foreign aid programmes, including those run by the UN and other agencies. That should come as a surprise to no one who watched the [presidential] campaign,” Mick Mulvaney responded.

“The president said specifically hundreds of times … ‘I’m going to spend less money on people overseas and more money on people back home’. And that’s exactly what we’re doing with this budget.”

Trump’s UN ambassador, Nikki Haley, has said that she does not believe in a “slash and burn” approach to US funding of the UN, but she agrees with the president that the US contribution is disproportionate.

“The UN spends more money than it should, and in many ways it places a much larger financial burden on the United States than on other countries,” Haley said on Thursday.

The US contributes more funding to the UN budget than any other nation. However, if the US contribution would follow the normal formula for member states’ shares – based on the size of a country’s economy and its per capita income –  the US would be paying even more. 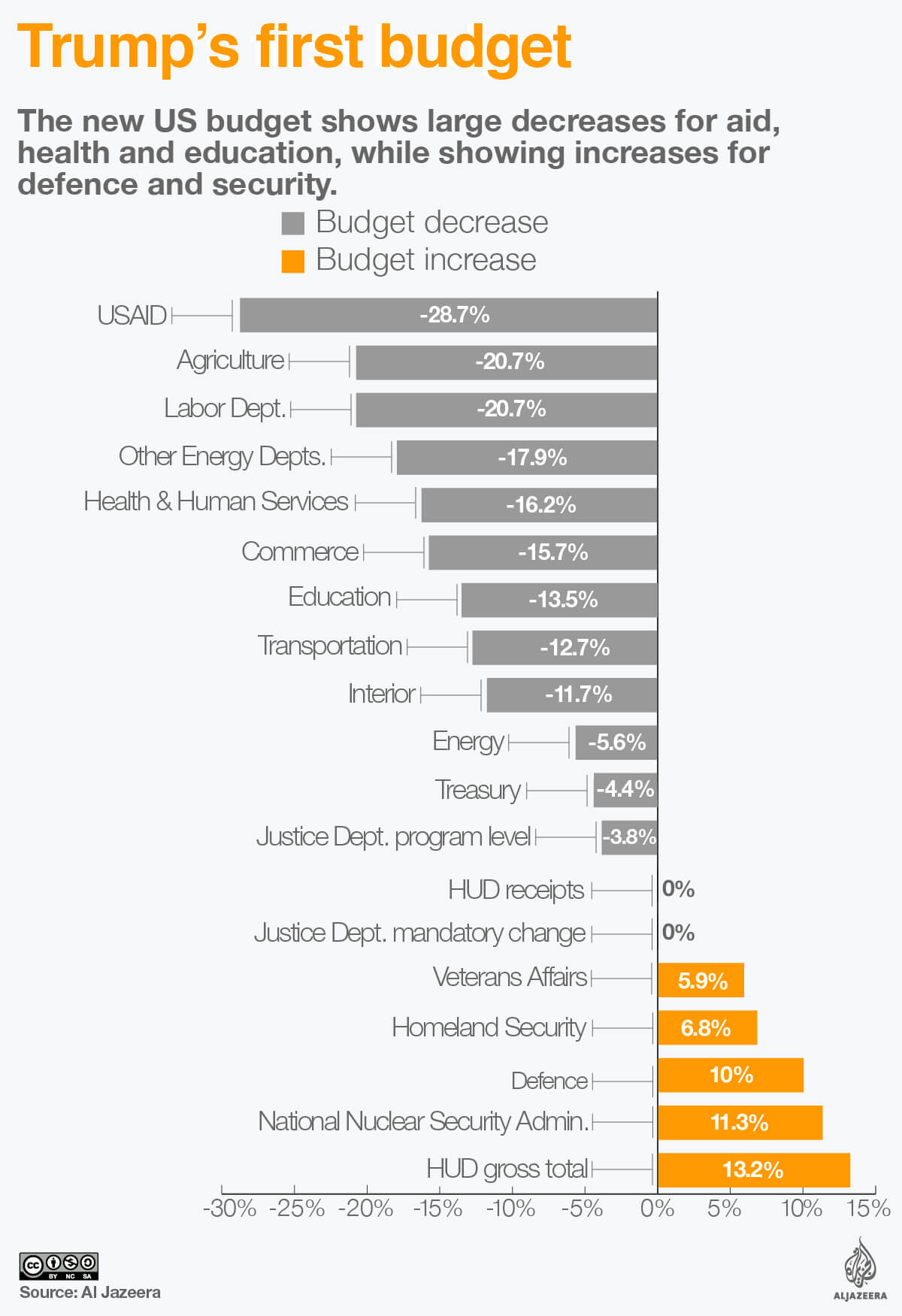 Diplomats at the UN headquarters in New York expressed worry over the proposed cuts and the impact the move would have.

“Diplomats are telling us that there’s no single other country or even group of countries that could make up for the shortfall in everything from emergency food and medical aid, housing aid, environmental programmes, political development programmes, in the whole span of work that the United Nations does,” Al Jazeera’s UN correspondent, Rosiland Jordan, said.

Matthew Rycroft, the British ambassador to the UN, said the US already has “a good deal” when it comes to the UN.

“The US is the only country whose contribution [has been] reduced in order for it not to pay too much,” Rycroft told Al Jazeera.

He noted that the new secretary-general has already made reforming the UN one of his priorities.  This process includes reviewing issues ranging from staffing to the scope of programmes and whether some of them should be scaled back.