US President Donald Trump paid $38m in taxes on more than $150m of income in 2005, the White House has said, acknowledging key details it previously refused to release.

The revelation came as a response to an MSNBC report on Tuesday that the US broadcaster had obtained two pages of his returns.

MSNBC host Rachel Maddow said she received the documents from investigative journalist David Cay Johnston, who said on her show that he received them in the mail.

READ MORE: Is there a ‘deep state’ trying to undermine Trump?

Speaking to Al Jazeera, Johnston said the $38m figure released by the White House included payroll taxes. When these are not taken into account, Trump’s total 2005 federal tax bill was $36.5m, the investigative journalist said.

According to the leaked pages of the tax return, Trump and his wife Melania paid $5.3m in regular federal income tax, and an additional $31m in the alternative minimum tax (AMT) – which the president wants to eliminate.

“If the alternative minimum tax had not been in effect in 2005, Trump would have paid only $5m of tax on $183m of income – that tax rate is less than the tax rate paid by the poorest half of Americans,” Johnston said from New York.

“Trump, this very wealthy man … wants a tax system where he would pay the same rate of tax as people who make less than $33,000 a year in America.”

‘That makes me smart’

The returns showed Trump paid an effective federal tax rate of 25 percent in 2005 after writing off $100m in losses.

The White House said in a statement that Trump took into account “large-scale depreciation for construction.”

It said the former reality TV star, as head of the Trump Organization, had a responsibility “to pay no more tax than legally required”.

Trump’s refusal to release his tax returns despite decades of precedent featured heavily in the 2016 presidential race. He said he could not release the filings as he was under audit.

Democrats hinted that by not releasing the documents, Trump may be trying to hide that he pays little to no tax, makes less money than he claims, or gives a negligible amount to charity.

In January, Trump adviser Kellyanne Conway said the White House would not release the documents.

Trump said his taxes are not of interest to the general public.

“You know, the only one that cares about my tax returns are the reporters,” he said during a news conference after his January 20 inauguration.

In the run-up to the November election, The New York Times published what it said were leaked tax filings from 1995 that revealed a deficit big enough for Trump not to pay federal income taxes for up to 18 years.

In the first presidential debate, when Trump’s rival Hillary Clinton accused him of not having paid federal tax in years, he responded, “That makes me smart”.

Al Jazeera’s Shihab Rattansi, reporting from Washington, DC, said that what many will be interested in is not Trump’s 12-year-old tax return, but his potential conflicts of interest – specifically allegations that he has been receiving contributions from foreign governments that could influence policy.

But “any money that he’s been making from foreign governments is unlikely to be in his personal income tax return, because he’s got so many different corporations, limited liability companies and so on,” Rattansi noted.

He added that Tuesday’s revelations could actually play out in Trump’s favour.

“The way MSNBC hyped it beforehand, and the skilful way the White House handled it, could bolster Trump’s base, who’ll say ‘look, it’s more fake news, there was nothing to see here’.

“Incidentally, at least for a while, it took the focus away from the controversy over the plan to replace the Obamacare system that will leave millions of people without healthcare coverage.”

The White House lashed out at MSNBC over the leaks.

“You know you are desperate for ratings when you are willing to violate the law to push a story about two pages of tax returns from over a decade ago,” it said in a statement. 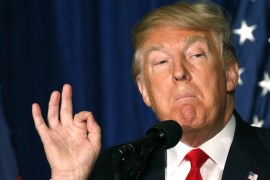 Donald Trump a ‘genius’ if he paid no taxes: advisers

Chris Christie and Rudy Giuliani praise the Republican candidate after reports he may not have paid tax for 18 years.