Myanmar officially recognises 135 ethnic groups but Rohingya Muslims have been rendered stateless and stripped of their citizenship.

They hail from the country’s northwest and speak a Bengali dialect. Almost all live in Rakhine, one of the poorest states, with a population of three million.

About 140,000 Rohingya in the Rakhine state live in ghetto-like camps that they cannot leave without government permission.

Below is a map of the country showing where each major ethnic group tends to live. 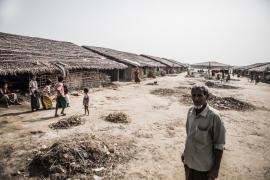 In Pictures: The plight of the Rohingya

Many Muslim Rohingya in Myanmar are still displaced after ethnic clashes drove them from their homes.