The Department of Justice has requested more time to respond to a request from legislators on the House of Representatives Intelligence Committee for evidence about President Donald Trump‘s allegation that then-president Barack Obama wiretapped him.

The department had been expected to provide a response by Monday to the House Intelligence Committee, which has made Trump’s wiretapping claims part of a bigger investigation into Russian interference in the 2016 presidential election.

But spokeswoman Sarah Isgur Flores said in a statement that the department has asked for more time to “review the request in compliance with the governing legal authorities and to determine what if any responsive documents may exist”.

The committee replied in a statement that it wanted a response by the time of a planned hearing on March 20.

“If the committee does not receive a response by then, the committee will ask for this information during the March 20 hearing and may resort to a compulsory process if our questions continue to go unanswered,” a spokesman said.

The justice department is not required to respond to the representatives’ request for evidence or meet its deadline.

Trump tweeted earlier this month that Obama had ordered him to be wiretapped. He presented no evidence, and the former intelligence director said last week that the claim was false.

The White House on Monday appeared to soften Trump’s claim.

Spokesman Sean Spicer said the president was not using the word wiretapping literally, noting that Trump had put the term in quotation marks – which he did only in his first tweet.

Is it legal for a sitting President to be "wire tapping" a race for president prior to an election? Turned down by court earlier. A NEW LOW!

I'd bet a good lawyer could make a great case out of the fact that President Obama was tapping my phones in October, just prior to Election!

How low has President Obama gone to tapp my phones during the very sacred election process. This is Nixon/Watergate. Bad (or sick) guy!

“The president used the word wiretap in quotes to mean broadly surveillance and other activities,” Spicer said.

He also suggested Trump was not accusing Obama specifically, but instead referring to the actions of his administration.

Trump himself has not commented on the matter since his March 4 tweets. 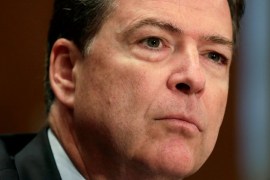