Aid workers employed by a US-based Christian charity have been abducted in famine-hit South Sudan and negotiations were ongoing for their release.

The local aid workers were taken from a village near Mayendit in Unity state, where a famine has been declared, 680km northeast of the capital, Juba.

The circumstances of the kidnappings were unclear.

“The rebels attacked and abducted eight local staff from Samaritan’s Purse and they are being held to ransom,” Brigadier-General Lul Ruai Koang told Reuters news agency.

However, the rebels dismissed as “propaganda” the military’s claim of a kidnapping, The Associated Press reported.

The charity confirmed the abductions in a statement, but denied a ransom had been demanded.

“We have been in contact with them and they have not been harmed. No ransom request has been made and we are hopeful that they will be released soon and safely,” it said.

South Sudan has been devastated by three years of civil war, with tens of thousands killed.

The fighting has slowed the humanitarian response to the famine, and United Nations and aid groups have been pleading for access.

Last week, South Sudan announced plans to charge a levy of $10,000 for each foreign aid worker, which with the danger of abduction could hurt efforts to help the hungry.

“The situation in Mayendit, South Sudan, is a level 4 famine. We call on all the parties involved to immediately provide complete and unfettered humanitarian access in order to meet the needs of a starving population in order to save lives,” the Samaritan’s Purse statement said.

He said the kidnappers were demanding a ransom of one million dollars from the oil company – which he named as the partly Chinese-owned Dar Petroleum – or the government.

“The government of South Sudan will not pay the ransom,” the minister said, calling for the unconditional release of the hostages.

WATCH: What can be done to save millions facing famine?

South Sudan is trying to revive its oil production – the government’s main source of revenue – which has plummeted because of the ongoing military conflict.

A split between President Salva Kiir and his former deputy Riek Machar turned violent in December 2013.

Tens of thousands have since been killed and 3.4 million displaced.

Aid workers have frequently complained of bureaucratic obstacles, checkpoints where government or rebel troops demand payments from aid convoys, looting of compounds, and even the rape and murder of humanitarian workers. 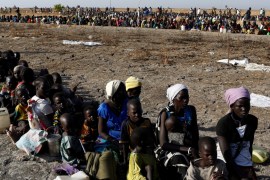 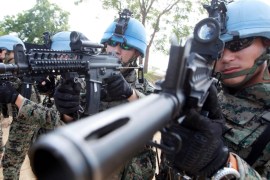 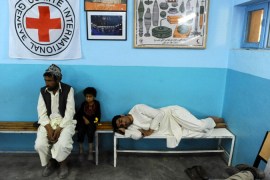