An alliance of fighters in Syria known as Tahrir al-Sham has claimed responsibility for twin bombings attacking Shia pilgrims in the centre of Damascus that killed at least 40 people.

“On Saturday … a twin attack was carried out by two heroes of Islam … in the centre of the capital Damascus, killing and wounding dozens,” the statement said.

The group, a large portion of which previously fought as an al-Qaeda affiliate, said the attack targeted “Iranian militias” and pro-government fighters in revenge for what it said was Iran’s role in supporting President Bashar al-Assad‘s “tyrannical rule”, holding them responsible for “killing and displacing” Syrians.

Iran and the Tehran-backed Hezbollah movement of Lebanon are close allies of the Syrian government.

The death toll from the blasts remained unclear as of Sunday.

Syrian state television said 40 people were killed and 120 wounded by “two bombs detonated by terrorists”, while Iraq’s foreign ministry said 40 of its nationals had died.

The UK-based Syrian Observatory for Human Rights said 76 people, including 43 Iraqi pilgrims, were killed when a roadside bomb detonated as a bus made its way through the Bab al-Saghir area of Damascus’ famed Old City, and then a suicide bomber blew himself up.

The war monitor said 11 bystanders and eight children were killed in the blasts, as well as 20 members of pro-government security forces.

In January, the Tahrir al-Sham alliance also claimed responsibility for twin suicide bombings in the high-security Kafr Sousa district of Damascus that killed 10 people, eight of them soldiers.

The centre of Damascus has been largely spared the violence that has rocked other major cities in Syria’s six-year war.

But periodic bombings have targeted Shia shrines and were subsequently claimed by groups such as the Islamic State of Iraq and the Levant (ISIL, also known as ISIS). 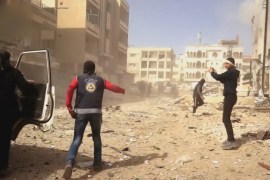 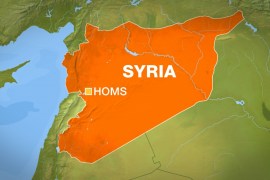 At least 32 people killed – including army’s top spy – after attacks on security offices in third-largest city. 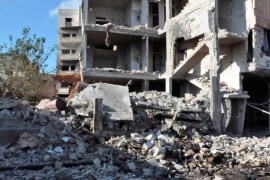 At least 48 killed, dozens wounded in five blasts in mostly government-held areas, including in Homs and Damascus.