China’s ruling Communist Party has hardened its rhetoric on Islam, with top officials making repeated warnings about the spectre of global religious “extremism” seeping into the country, and the need to protect traditional Chinese identity.

Sharhat Ahan, a top party official in Xinjiang, on Sunday became the latest official from a predominantly Muslim region to warn political leaders gathered in Beijing that the “international anti-terror situation” is destabilising China.

Officials from Ningxia Hui Autonomous Region, which has an ethnic Hui population that is predominantly Muslim, warned similarly this past week about the perils of “Islamic extremism”.

READ MORE: Is China changing its policy towards Uighur Muslims?

Speaking at a regional meeting open to the media, Ningxia Communist Party secretary Li Jianguo drew comparisons to the policies of US President Donald Trump‘s administration to make his point.

“What the Islamic State and extremists push is jihad, terror, violence,” Li said. “This is why we see Trump targeting Muslims in a travel ban.

“It doesn’t matter whether anti-Muslim policy is in the interests of the US or it promotes stability, it’s about preventing religious extremism from seeping into all of American culture.”

Over the past year, President Xi Jinping has directed the party to “Sinicise” the country’s ethnic and religious minorities.

Regional leaders in Xinjiang, home to the Muslim Uighur ethnic minority, have also ramped up surveillance measures, police patrols and demonstrations amid fear of violence blamed on Muslim groups.

Wu Shimin, a former ethnic affairs official from Ningxia, said that ideological work must be strengthened in the region to promote a Chinese identity among its Hui population, the descendants of Muslim traders plying the Silk Road centuries ago.

The Communist Party has long viewed religion with suspicion but has generally granted a fair degree of religious freedom to its Hui minority, especially in their heartland of Ningxia, where mosques dot the skyline.

The party has kept a far tighter grip over Xinjiang’s Uighurs — who have a language, culture and physical features that are more closely linked to Central Asia — partly due to the existence of a decades-old separatist movement.

Mohammed al-Sudairi, a doctoral student at the University of Hong Kong, said “there’s a strengthening trend of viewing Islam as a problem in Chinese society.”

“Xi Jinping has been quite anxious about what he saw as the loss of party-state control over the religious sphere when he entered power, which necessitated this intervention. I don’t think things will take a softer turn.”

In Xinjiang, where hundreds of people have died in recent years in violent attacks, the government’s rising rhetoric has coincided with new security measures that activists said exacerbate a cycle of repression, radicalisation and violence.

The government, meanwhile, said Xinjiang faces a grave separatist threat from Uighur fighters allegedly linked to al-Qaeda and the Islamic State of Iraq and the Levant (ISIL), though it provides little evidence for such claims.

ISIL released a video in late February purportedly showing Uighur fighters training in Iraq and vowing to strike China, according to the SITE Intelligence Group.

On Friday, Xi met Xinjiang officials, according to state media, and directed them to safeguard the region’s stability by erecting a metaphorical “great wall of iron”, a reference to the military response following the pro-democracy protest in Tiananmen Square in 1989. 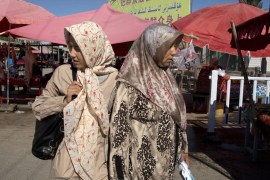 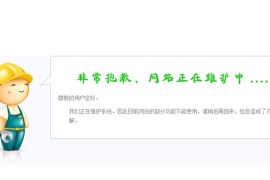 Authors of letter to president challenging “crimes of totalitarian system” say website shut down after their petition. 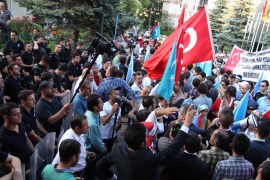