Families buried some of the 37 girls killed in a fire at an overcrowded government-run youth shelter as Guatemalan authorities worked on Friday to determine exactly what happened.

The death toll mounted as girls succumbed to gruesome burns from Wednesday’s disaster, which officials said began when mattresses were set afire during a protest by the shelter’s residents.

Questions remained over why someone among the girls set the blaze and whether doors remained locked as the girls pleaded for their lives.

Parents and relatives said many of the young people at the shelter, which had both female and male residents, had been sent there because of abuse, poverty or family problems.

Others were ordered there by judges after run-ins with police, officials said.

A coffin holding 17-year-old Siona Hernandez Garcia was gently slipped into a niche at a Guatemala City cemetery on Friday and street musicians played hymns as workers bricked up the space.

“Guatemala is full of violence,” Garcia said. “They are raping and killing the poor’s girls.”

At the entrance to Roosevelt Hospital, Claudia Tecun broke down in tears talking about her daughter Noemi Tecun Munoz, 17, who was being treated inside for burns over 70 percent of her body.

“The doctors say there isn’t much hope she will live,” Tecun said, weeping.

“I heard on the news that my daughter was one of the girls who set the fire at the shelter; that’s not true,” she said. “My daughter wouldn’t try to take her own life.”

That was a reference to widespread reports, including from other victims’ relatives, that some of the girls set mattresses on fire to protest their apprehension and return to the facility after fleeing the previous night because of mistreatment, bad food and fears of rape.

San Juan de Dios Hospital officials said late on Friday that another girl had succumbed to her wounds, bringing the death toll to 37, with 19 dying at the scene and 18 others later while being treated at hospitals.

Hospital director Carlos Soto said that visiting doctors evaluating the burn victims had offered to take eight of them to Galveston, Texas, for specialised burn treatment.

Soto said the government had obtained humanitarian visas for the children from US officials, but authorities were awaiting permission from the parents.

She was in a locked area where girls who took part in the escape attempt had been placed, he said.

“My daughter said the area was locked and that several girls broke down a door, and she survived because she put a wet sheet over herself,” Castillo said.

“She said the girls told her that they had been raped and in protest they escaped, and that later, to protest, to get attention, they set fire to the mattresses,” he said.

As grieving families began receiving the bodies of girls whose remains had been identified, others were still searching for their children.

Vianney Clareth Hernandez was waiting outside a morgue with a photo of her daughter, Ashley.

The 14-year-old was at the shelter but her mother said she had not found the girl at any of the local hospitals.

“It was a crime they didn’t open the doors, they didn’t do anything to get the girls out, even though they were screaming,” Hernandez said.

While many people believed reports that the doors at the overcrowded shelter were kept locked even as the fires spread, authorities said the circumstances were still under investigation.

But the exact sequence of events may never be known. Castillo said his daughter Kimberly had testified to police that the girls who started the fire were among those who died in the blaze.

The few surviving girls at the hospital were put under police guard on Friday for their own protection as witnesses. 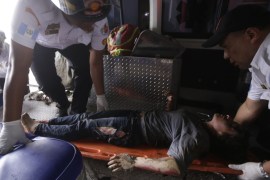 More teenagers die from burns as questions mount over alleged mismanagement and abuse.