What was once seen as a historical triumph, South Korea’s Park Geun-hye’s political career has now been marred by a corruption scandal that led to her eventual downfall.

Elected the country’s first female president four years ago, Park was removed from office on Friday after the Constitutional Court upheld her impeachment following months of widespread protests with, at times, millions of South Koreans calling for her resignation.

While Park’s presidential fate has now been decided, her career was marked by tragedy, triumph and controversy.

No stranger to politics

Park was no stranger to the political scene. Her father, the late President Park Chung-hee, seized power after a military coup in 1961.

Following the assassination of her mother in 1974, Park served as her father’s de facto first lady.

The elder Park, who was killed by his security chief in 1979, won wide respect for transforming the poor war-ravaged nation into an economic powerhouse, but was also reviled in some quarters for his human rights abuses.

Still, many older South Koreans remembered the almost two-decade dictator’s rule with fondness and younger Park partly rode on the coattail of her father to eventually launch her own political career.

After the murder of her father, Park withdrew from public service until 1998 when she was first elected to South Korea’s National Assembly, serving five terms as a representative.

She told US media that the Asia economic crisis of the 1990s drew her back into the political sphere.

In 2007, she lost to Lee Myung-bak in the then-Grand National Party presidential primary. Lee went on to become president, but the country’s leaders are restricted to a single five-year term, giving way to Park’s victory in the 2012 presidential election.

Park’s downfall began last year after a reports surfaced that alleged she and her former senior secretary and confidante, Choi Soon-sil, colluded to pressure big businesses into paying money to foundations Choi controlled.

Park publicly acknowledged her close ties to Choi, and said the long-time friend helped her on speeches and public relations issues during the 2012 presidential campaign and 2013 inauguration.

Park apologised on several occasions, but denied any wrongdoing .

The reports prompted widespread demonstrations in the country’s capital, with, on some occasions, millions of people protesting in the streets to call for her resignation.

Park was impeached in December of last year by a parliamentary vote of 234 to 56.

In the weeks leading to her eventual removal, Park was also accused of soliciting bribes from the head of the Samsung Group for government favours including the backing of a merger of two Samsung affiliates in 2015. She has denied any wrongdoing.

On Friday, she was removed as president after a unanimous ruling of the Constitutional Court, which found her actions had “seriously impaired the spirit of…democracy and the rule of law”.

The verdict removed Park’s presidential immunity, meaning she could be prosecuted over the allegations.

Despite the large-scale anti-Park protests that have gripped the country for the past three months, Park remains revered by many , particularly by those among the older generation.

“We have to really take a step by and see this as a generational divide”, Jean Lee, a journalist and global fellow at the Woodrow Wilson Center’s Korea centre, told Al Jazeera.

“The pro-Park camp is much older, they’re conservative. They grew up in a very different South Korea than the younger generation,” Lee added.

But younger South Koreans see Park as a sign of a corrupt past and have celebrated the Constitutional Court’s decision to oust their now former leader. 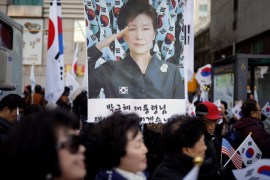 Celebrations after court upholds President Park Geun-hye’s impeachment, but two die after protests against her removal. 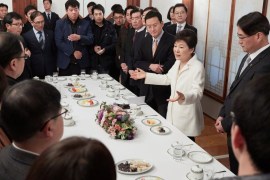