US ambassador to the United Nations Nikki Haley said the new administration of President Donald Trump “will not hesitate to call out Russia if we see something wrong”.

Speaking to Al Jazeera’s Washington editor James Bays after Trump’s first address to a joined session of Congress on Tuesday evening, Haley said the president had changed his tone.

“It was a very different tone. It was presidential. It was meant to tell the world that America is going to lead again,” Haley said.

“I think it was time for him to change the tone and he did that tonight. His goal is to unify the country. His goal is to let the world know that we’re for peace and security and also we want to make more allies,” she added.

Asked if Russia could be one of those allies or whether Moscow was a foe of the new Trump administration, Haley said: “Russia doesn’t have to be one or the other. I think it depends on the day.

“Certainly if we can get Russia to be with us, that’s fine. But today we were very upset by Russia not voting for the resolution that criticised Syria for using chemical weapons on their own people.

“We have criticised Russia for Crimea and Ukraine, for the actions they’ve taken there. We will call them out when we see something wrong. If we see where we can work together, of course, we’re going to try and do that.”

Trump in his speech insisted on his support for the NATO alliance, but repeated that members must pay their way and warned it is not his job to “represent the world”.

The new leader spooked allied capitals during his campaign by arguing that US support for NATO should depend on members increasing defence spending, but he has since been at pains to defend the pact.

“We strongly support NATO,” he said. “But our partners must meet their financial obligations.

“We expect our partners, whether in NATO, in the Middle East or the Pacific, to take a direct and meaningful role in both strategic and military operations, and pay their fair share of the cost.”

Haley repeated to Al Jazeera that US allies have nothing to worry about.

“My allies know, now more than ever, that we got their back. Israel has seen it; Ukraine has seen it; France and the UK has seen it,” the ambassador said.

“We are going to continue to show them that. And they’ve seen us call out Russia multiple times. So I think there is nothing to worry about,” she added.

“The United States is strong. We’re going to lead again and we’re going to really show the world that we are about peace and stability.” 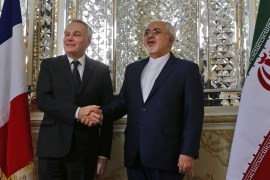 US puts Iran ‘on notice’ after missile test confirmed

US national security adviser signals toughening stance on Tehran after Iran insists tests did not breach nuclear accord. 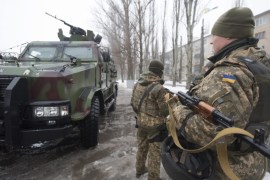 If Ukraine turns away from the Minsk Agreement, there will be no Western leverage to put pressure on Russia.