President Donald Trump said military plans have been set in motion to “extinguish” the ISIL group as he vowed to keep “terrorists” from operating in the United States.

During his speech to the US Congress on Tuesday night, Trump said it was the responsibility of his new administration to ensure improved vetting procedures to “keep those out who will do us harm”.

The president said national security data shows the vast majority of people convicted of “terrorism” offences came from outside the United States.

He specifically addressed the threat from the Islamic State of Iraq and the Levant, also known as ISIS, during his address.

“As promised, I’ve directed the Department of Defense to develop a plan to demolish and destroy ISIS – a network of lawless savages that have slaughtered Muslims and Christians and men, women and children of all faiths and all beliefs.

“We will work with our allies, including our allies in the Muslim world, to extinguish this vile enemy from our planet,” the president said.

Trump also honoured an American commando killed in a Yemen raid against al-Qaeda on January 29, which was ordered by the new administration in its first days.

The widow of Navy Seal William “Ryan” Owens sat in the guest box with tears streaming down her face as the crowd stood and applauded at length.

Owens’ death – as well as the killing of civilians, possibly including women and children – has raised questions about the effectiveness of the raid.

Trump quoted his defence chief Jim Mattis in defending the operation. “Ryan was a part of a highly successful raid that generated large amounts of vital intelligence that will lead to many more victories in the future against our enemies,” he said.

Owens’ father, Bill, has denounced the operation that took his son’s life and refused to meet Trump. He told the Miami Herald newspaper last week the raid was a “stupid mission” and called for an investigation. 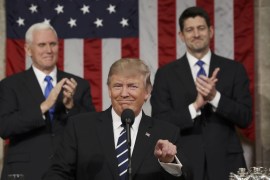 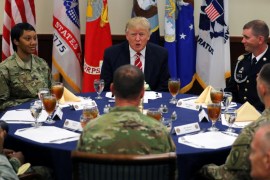