An Israeli land grab law that retroactively legalises thousands of settlement homes in the occupied West Bank legitimises theft, violates international law and ends the prospect of a two-state solution, according to politicians, legal experts and human rights groups.

The so-called “Regulation Bill” drew immediate condemnation after it was voted in by members of the Knesset late on Monday with a 60 to 52 majority.

The law applies to about 4,000 settlement homes in the West Bank for which settlers could prove ignorance that they had built on privately owned Palestinian land and had received encouragement from the Israeli state to do so.

Three Israeli NGOs – Peace Now, Yesh Din and the Association for Civil Rights in Israel – and numerous Palestinians said they intended to petition the Supreme Court to cancel the law.

UN Secretary-General Antonio Guterres said on Tuesday in a statement: “This bill is in contravention of international law and will have far-reaching legal consequences for Israel.”

The EU’s foreign policy chief Federica Mogherini said in a statement that the bloc “condemns” the law and urges against its implementation “to avoid measures that further raise tensions and endanger the prospects for a peaceful solution to the conflict”.

Palestinian President Mahmoud Abbas said the law was an aggression against the Palestinian people.

“That bill is contrary to international law,” Abbas said after a meeting with French President Francois Hollande in Paris. “This is an aggression against our people that we will be opposing in international organisations.

“What we want is peace … but what Israel does is to work toward one state based on apartheid.”

Hollande called on Israel to go back on the law, saying it would “pave the way for an annexation, de facto, of the occupied territories, which would be contrary to the two-state solution”.

Hours before Abbas’ meeting with Hollande, Saeb Erekat, secretary-general of the Palestinian Liberation Organisation, told the Associated Press news agency that the law put “the last nail in the coffin of the two-state solution”.

“What you have here is a crazy number of settlers in the [Knesset].

The settler lobby within the Israeli parliament is quite strong, even when they know that what they are doing is unconstitutional and will probably not pass the Supreme Court.

The idea is that the government gets in on it … even if they don’t get their way this time, they will be compensated if the Supreme Court rejects it.

All in all, there isn’t much room for international pressure on Israel. Prime Minister Benjamin Netanyahu knows it; he knows he has a president in the White House who’s going to back him.

Israel is basically going on a spree to increase the settlements in the West Bank. At the end of the day, this is a moving, explosive situation that I cannot see in any shape or form in the intermediate-run is simply going to go by without real, major repercussions in Palestine or outside.

Developing, over the last 50 years, is a dual system of government: one for the Jews in the West Bank and one for the Palestinians. There is only one name for that: apartheid.

The Arab League accused Israel of “stealing the land” from Palestinians.

“The law in question is only a cover for stealing the land and appropriating the property of Palestinians,” the head of the Cairo-based organisation, Ahmed Aboul Gheit, said.

Palestinian owners will be compensated financially or with other land, but cannot negotiate their terms.

The law is a continuation of “Israeli policies aimed at eliminating any possibility of a two-state solution and the establishment of an independent Palestinian state”, Aboul Gheit said.

Jordan, one of the few Arab states to have diplomatic ties with Israel, also denounced what it called “a provocative law likely to kill any hope of a two-state solution”.

According to the UN envoy for the Middle East peace process, Nickolay Mladenov, the law crosses a “very thick red line” towards annexation of the occupied West Bank, and sets a “very dangerous precedent”.

Speaking to the AFP news agency, he said: “This is the first time the Israeli Knesset legislates in the occupied Palestinian lands and particularly on property issues.”

He also raised the possibility the law could open Israel up to potential prosecution at the International Criminal Court, a threat Israel’s own top government lawyer, attorney general Avichai Mandelblit, has warned of.

Mladenov called for strong international condemnation of the legislation, but declined to criticise the US after President Donald Trump’s administration refused to comment on it.

Trump is more sympathetic to Israel’s settlement policies than previous US presidents. The Israeli government has approved plans to build thousands of new homes on occupied territory since the new US president took office.

“I think that is a very preliminary statement,” Mladenov said. “Obviously, they do need to consult, this is a new administration that has just come into office and they should be given the time and the space to find their policies.”

White House spokesman Sean Spicer said the US was likely to discuss the law with Netanyahu when the Israeli prime minister visits on February 15, but did not comment further in a press briefing on Tuesday.

David Harris, head of AJC, the global Jewish advocacy organisation, said that “Israel’s High Court can and should reverse this misguided legislation” before Netanyahu’s meeting with Trump in February.

That was also the message from Defence Minister Avigdor Lieberman, who said last week: “The chance that it will be struck down by the Supreme Court is 100 percent.”

Tobias Ellwood, Britain’s Middle East minister, also condemned the land grab bill, saying it “is of great concern that the bill paves the way for significant growth in settlements deep in the West Bank”.

Yuval Shany, an international law professor at the Hebrew University in Jerusalem, said the law violated basic rights, interferes with property rights and is discriminatory because it regulates only the transfer of land from Palestinians to Jews

‘Against all international laws’

International law considers all settlements to be illegal, but Israel distinguishes between those it sanctions and those it does not, which are dubbed outposts.

A Palestinian cabinet minister also called on the international community for support.

“This is an escalation that would only lead to more instability and chaos,” Rdeneh said.

The international community views settlements as illegal and an obstacle to reaching peace. 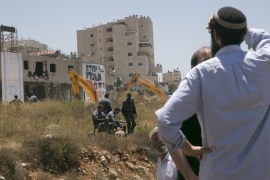