The US government has lodged papers with a federal appeals court against the suspension of President Donald Trump’s controversial travel ban.

The document, which argues that barring immigrants from seven mainly Muslim countries is a lawful exercise of the president’s authority, was filed on Monday with the San Francisco-based 9th US Circuit Court of Appeals.

The move by the justice department comes after an appeals court over the weekend denied the Trump administration’s request to immediately set aside a Seattle judge’s ruling that put a hold on the ban nationwide.

The federal appeals court asked lawyers for the states of Washington and Minnesota, which are legally challenging Trump’s order, and the justice department to argue at 23:00 GMT on Tuesday whether the ban should remain shelved.

“What will be argued in court is a very narrow legal interpretation, which is, does the president have the right to issue executive orders which can stop people coming into the country,” Al Jazeera’s Alan Fisher, reporting from Washington, DC, said.

The justice department says that the issue is a matter of national security and Trump’s executive order was well within his authority.

“The noise that is coming out of the White House in the last few hours is that they believe they are on very solid ground and that the executive order will soon be resumed,” Al Jazeera’s Fisher said.

IN PICTURES: Solidarity and British humour at London anti-Trump demo

Earlier on Monday, White House spokesman Sean Spicer said the Trump administration was confident it will prevail in the lawsuit.

“Clearly, the law is on the president’s side,” Spicer told reporters on Air Force One.

“He has broad discretion to do what’s in the nation’s best interest to protect our people, and we feel very confident that we will prevail in this matter,” he added.

The restrictions on all refugees and travellers from Iran, Iraq, Libya, Somalia, Sudan, Syria, and Yemen went into effect on January 27, causing chaos at airports across the US and leaving travellers trying to reach the country in limbo. Refugees from Syria were blocked indefinitely.

The political backlash for Trump has been equally severe, with the order prompting numerous mass protests.

Top technology giants, including Apple, Google and Microsoft banded together with nearly 100 companies on Sunday to file a legal brief opposing Trump’s immigration ban, arguing that it “inflicts significant harm on American business”.

Noting that “immigrants or their children founded more than 200 of the companies on the Fortune 500 list”, the brief said Trump’s order “represents a significant departure from the principles of fairness and predictability that have governed the immigration system of the United States for more than 50 years”.

The controversial executive order also “inflicts significant harm on American business, innovation, and growth as a result,” the brief added.

Trump, who – during his campaign – called for a temporary ban on Muslims entering the US, has repeatedly vowed to reinstate the ban. 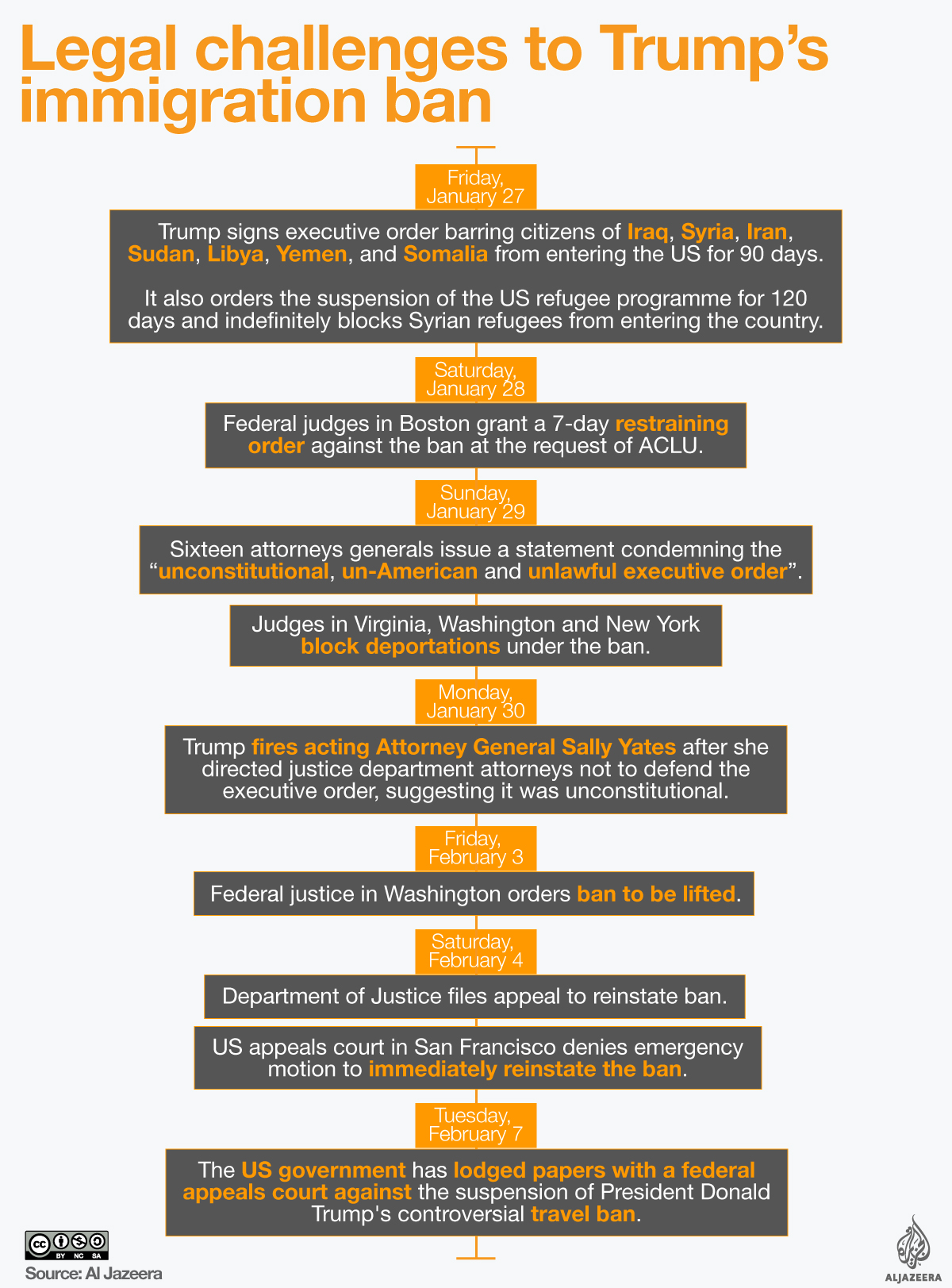