Jovenel Moise has been sworn in as Haiti’s new president, opening a new chapter in the country’s history after a long-running political crisis.

The 48-year-old banana exporter, who has never held political office, took the oath of office on Tuesday in a ceremony in the capital, Port-au-Prince.

The handpicked candidate of Haiti’s former president, Michel Martelly, Moise initially won the first round of voting in October 2015 – but the results were subsequently annulled amid allegations of massive fraud.

The elections were further postponed in October after Hurricane Matthew battered the country, killing hundreds and causing extensive damage.

Yet, his critics claimed he did not gain a mandate because only 21 percent of voters went to the polls.

The new president begins his five years in power with already fragile popularity because he is at the centre of an unresolved money laundering probe.

Haiti has been dependent on international aid since a powerful earthquake devastated it in January 2010. Its serious economic problems have been compounded by political instability, violence and corruption.

According to the UN World Food Programme, two and half million Haitians live in poverty.

REWIND: Haiti in a Time of Cholera

Despite the challenges Moise faces as the poor Caribbean country’s new president, some Haitians are willing to give him a chance.

“We have to wait and see what is going to happen. Previous governments came and made promises, but nothing happened,” Desilien Simedieu, a community leader at the Carradeux camp, where most people live on less than $3 a day, told Al Jazeera.

“The only thing we can do is wait.” 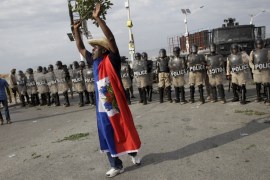 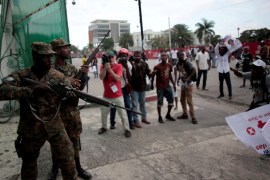 Several parties claim victory as tensions spill out on the streets of Haiti following Sunday’s election. 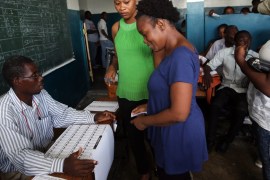