Civilian casualties in Afghanistan in 2016 were the highest recorded by the United Nations, the world body said, with nearly 11,500 non-combatants – one-third of them children – killed or wounded.

A total of 3,498 civilians were killed and 7,920 were wounded in 2016, a combined increase of three percent over the previous year, according to the annual report for 2016.

“Against a backdrop of protracted ground fighting, the battlefield permeated civilian sanctuaries that should be spared from harm, with suicide attacks in mosques; targeted attacks against district centres, bazaars and residential homes; and the use of schools and hospitals for military purposes,” the UN said.

Danielle Bell, the director of UNAMA’s human rights unit, called on the parties to the conflict to take stronger measures to mitigate harm on the battlefield.

“They should start making promises and ensure the commitments they made are translated into reality on the battlefield. This is the only thing that has to happen to prevent civilian causalities,” she told Al Jazeera.

About 61 percent of all civilian casualties were caused by armed groups like the Taliban and the Islamic State of Iraq and the Levant (ISIL, also known as ISIS).

The UN attributed at least 4,953 deaths and injuries to the Taliban, but in a shift for 2016, investigators documented a 10-fold increase in casualties caused by ISIL, which often targets members of the Shia Muslim minority.

At least 899 deaths and injuries were attributed to ISIL, which has previously been a relatively minor faction in Afghanistan, but last year launched an increasing number of suicide attacks.

Last year saw the highest number of civilian casualties from suicide attacks since the UN began tracking the numbers. 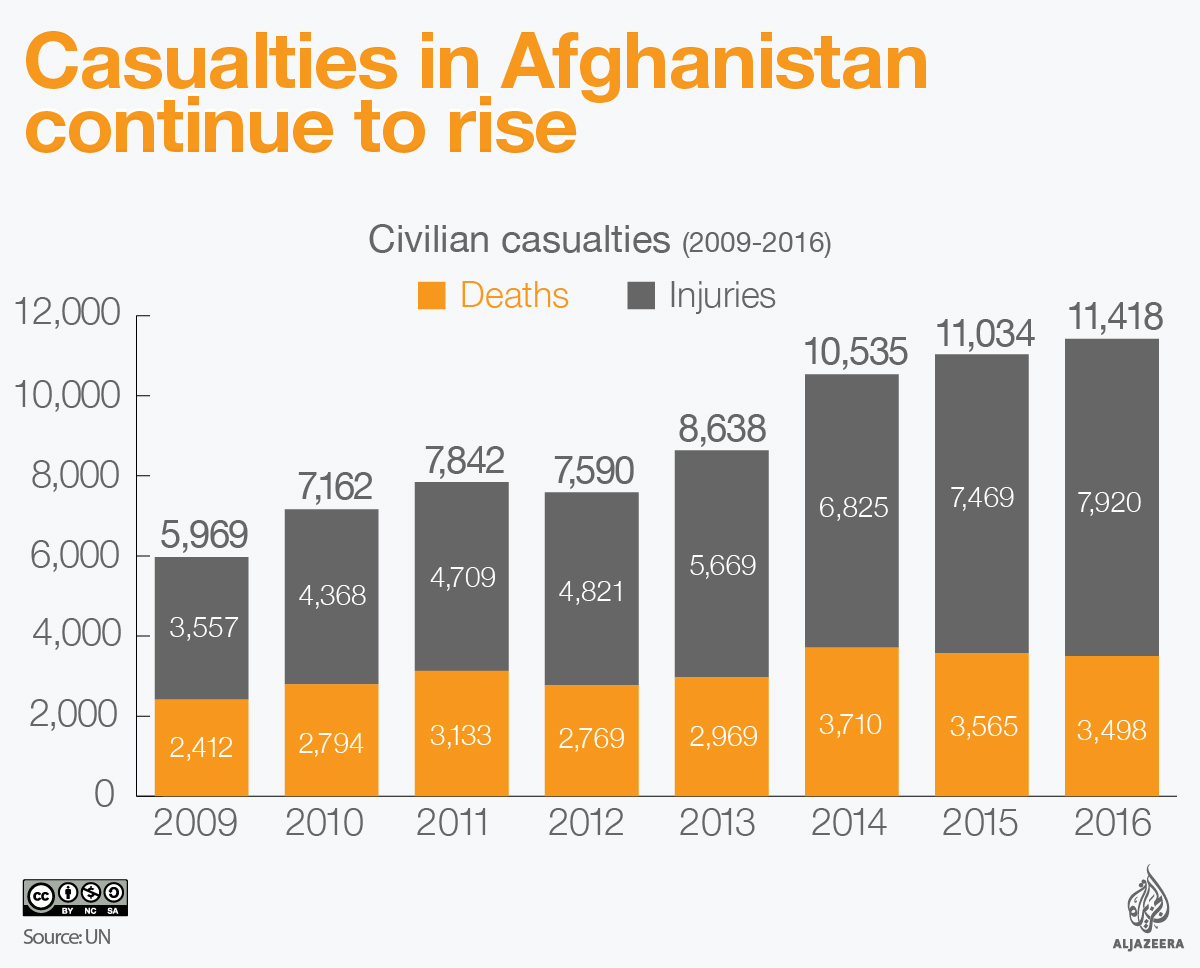 ‘I ndiscriminate use of heavy weapons’

Afghan security forces caused about 20 percent of the overall casualties, while pro-government fighters and international forces caused two percent each.

Among the deadliest tactic used by government forces was the indiscriminate use of heavy weapons, such as mortars in populated areas, the UN said.

As the Afghan air force acquired more attack aircraft and the US ramped up its campaign against both ISIL and the Taliban, casualties in air raids increased 99 percent compared with 2015.

Air raids by international warplanes resulted in at least 127 civilian deaths and 108 injuries in 2016, while the Afghan air force accounted for at least 85 deaths and 167 injuries.

UN investigators were not able to attribute responsibility for 38 deaths and 65 injuries from air strikes.

US officials have only acknowledged possible civilian casualties in one incident in Kunduz province in November, when the UN said as many as 32 non-combatants were killed and 26 wounded in a joint US-Afghan raid.

Casualties among children spiked by 24 percent in 2016, with 923 dead and 2,589 wounded, largely as a result of a major increase in casualties from unexploded ordnance.