It is an accepted truth that the desert of Saudi Arabia is hot; the waters of the Gulf are as warm as a bath and air-conditioning is a necessity at almost all times. But there is winter here, too.

In the summer, there is even a bit of monsoon rain on the Arabian Sea coast of Oman. But in the winter, it really does change. Snow usually appears on the high ground of northern Saudi Arabia and temperatures do drop to levels that make the Gulf coast a reasonable destination for holiday makers fed up with a cold European winter.

This week they will have been disappointed. The latest wave of cold air sweeping down from the frozen ground of western Russia and Eastern Europe has been a shock.

A local news site reported that 10cm of snow fell at Jais Mountain in the UAE.

The lowest temperature on record for Doha, the capital of Qatar, is 4 degrees Celsius – a figure recorded in 1967. On Thursday night the low was 9C, but with wind-chill, it felt like 6C.

The Shamal wind, a strong gust from the northerly quarter, started building on Wednesday and really kicked in on Thursday, bringing increasingly cold air. The maximum temperature in Doha on Friday was a poor 14C. A day this cold has not been felt by most current residents. The February average maximum is 23C and overnight minimum 14C.

Residents of Abu Dhabi were even more shocked by the cold. On Wednesday the thermometer was at 31C; on Friday, 18C was the maximum.

The National Center of Meteorology and Seismology posted video of snow falling on the Jais mountain.

The wind was blowing at its worst onto the shores of the UAE, with Dubai registering speeds over 50kph.

The winds were enough to bring down a crane on Friday.

The storm also led to the cancellation of a stage in the Tour of Dubai bike race, with organisers saying the strong winds posed a danger to riders.

Meteorologists were happy – this rare event allowed the tracking of a proper winter cold front that brought copious snow to Iran and Pakistan. It brought rain to Bahrain, Qatar and the UAE, and snow – a dusting – to Jais Mountain in the borderlands between the UAE and Oman.

There is no sudden “return to normal” in the forecast. A gradual warming over the coming week will be stopped by another Shamal wind next weekend. 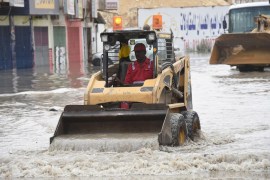 Not so sunny in the Arabian Peninsula

Some areas affected by storms see year’s worth of rain falling in the space of a few hours.