Turkish and US-led coalition fighter jets have carried out bombing raids against ISIL positions near Syria’s al-Bab, a town held by ISIL and besieged by Turkey-backed Syrian rebels for almost two months, according to a Turkish military statement.

A total of 47 ISIL (also known as ISIS) fighters were “neutralised” in clashes and air raids in the past 24 hours, the statement said, adding that buildings, defence posts, shelters and an ammunition depot were destroyed in raids.

The Turkish army also hit 135 Islamic State of Iraq and the Levant targets in northern Syria, the General Staff said in a statement.

Turkish jets destroyed 64 targets, including 45 buildings, three bomb-laden vehicles and five headquarters used by the armed groups in the region around al-Bab, according to the statement.

There was no immediate response from ISIL.

Turkey first sent tanks across the border on August 24 as part of the operation Euphrates Shield. Four days later, the Turkish army suffered  its first fatality in northern Syria, in a rocket attack blamed on Kurdish militias.

The city is in a strategic area, close to the Turkish border in northern Syria en route to Raqqa and Idlib.  Al-Bab is one of the few remaining strongholds of ISIL.

If it takes Al-Bab, the Turkish military says its next objective is to clear the whole area and retake the town of Manbij from the SDF, a largely Kurdish militia.

More than 215 residential areas, including Jarablus city in northern Syria, have been cleared of ISIL as part of the Euphrates Shield operation so far, according to the Turkish military. 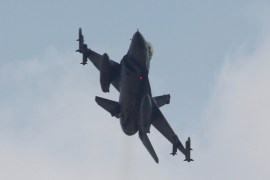