A film celebrating the White Helmets , a volunteer rescue group that operates in rebel-held parts of Syria, has scooped an Oscar for best short documentary on a night marked by politics.

The eponymously titled White Helmets, a 40-minute Netflix film, gives a window into the lives of the group’s volunteers as they scramble to pull people from the rubble of buildings flattened in bombing raids.

Accepting the Academy Award, director Orlando von Einsiedel urged the audience to get out of their seats and call for an end to Syria’s six-year civil war , which led to a standing ovation.

Von Einsiedel read a statement from White Helmets founder Raed al-Saleh in which he thanked the academy and said the group had saved tens of thousands of lives since it was formed in 2014.

“We are so grateful that this film has highlighted our work to the world. Our organisation is guided by a verse from the Quran: To save one life is to save all of humanity,” Saleh’s statement said.

“We have saved more than 82,000 Syrian lives. I invite anyone here who hears me to work on the side of life to stop the bloodshed in Syria and around the world.”

Rescue workers in Syria are at risk of being killed in so-called double tap air raids that target them as they arrive at the scene of a strike. The group says that many of its volunteers have been killed.

Syrian cinematographer Khaled Khatib, who worked on the documentary, was unable to attend after being barred from entering  the US despite being granted a visa.

US officials reportedly discovered “derogatory information” about him, according to a document seen by the Associated Press news agency.

An Iranian film, The Salesman, won the best foreign language film award after its director, Asghar Farhadi, refused to attend the ceremony as a protest against Trump’s immigration policies. Iran was on the list of seven countries.

A female Iranian astronaut, Anousheh Ansari, accepted the award on his behalf.

“I’m sorry I’m not with you tonight,” Farhadi said in a statement read by Ansari. “My absence is out of respect for the people of my country and those of other six nations who have been disrespected by the inhumane law that bans entry of immigrants to the US.

“Dividing the world into the US and ‘our enemies’ categories creates fear – a deceitful justification for aggression and war.”

It was the second Oscar for Farhadi, who won in the same category for A Separation in 2012.

Though  Donald Trump ‘s name was rarely mentioned during the ceremony, his policies were a running subtext throughout proceedings.

Several actors and actresses, including the Ethiopian Irish Ruth Negga who was nominated in the best actress category, wore blue ribbons in support of the American Civil Liberties Union, a high-profile civil rights group.

“I want to say thank you to President Trump,” Kimmel said as the ceremony opened.

“Remember last year when it seemed like the Oscars were racist?”

In 2015, criticism swirled around a lack of diversity among nominees, stirring a campaign that became known by the hashtag  #OscarsSoWhite .

That criticism continued into 2016, with several people, including actor Will Smith, boycotting the ceremony.

A record six black actors were nominated this year, though, and a person of colour was nominated in each of the main acting categories – the first time that has happened.

On Friday, the directors of all five Oscar-nominated foreign language films, including Farhadi, had condemned what they described as a “climate of fanaticism and nationalism” in the US and elsewhere in a joint statement.

They said that, whoever won, the award would be dedicated to people working to foster “unity and understanding.”

“Tonight is proof that art has no borders, no single language and does not belong to a single faith,” academy president Cheryl Boone Isaacs, who has worked to diversify its membership, said.

Mahershala Ali, an Ahmadi Muslim, won the best-supporting actor award for his role in Moonlight, which also won best picture.

In his acceptance speech, he announced the birth of his daughter and thanked his wife as well as “many wonderful teachers”.

Celebrities had used the spotlight at earlier award shows to denounce the Trump administration’s stance on immigration, transgender rights and the media.

The Oscars is the highlight of the Tinseltown calendar, and wraps up two months of glittering prize galas. 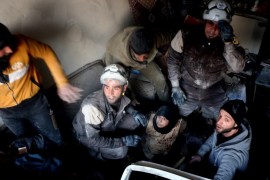 Syria’s ‘White Helmets’ makers get US visas for Oscars

Leader of rescue group and filmmaker plan to attend Academy Awards next week after suspension of Trump’s travel ban.