In a typical February, much of the United States is in the grip of cold winter weather – not this year.

Record-high temperatures have been recorded across much of the country, and the warmth will continue for a while yet.

The usual winter weather pattern involves cold Arctic being driven southwards on a powerful jet stream. This month, however, the jet stream has remained well to the north, largely confined to Canada.

Much of the central and southern US is sitting underneath an area of high pressure.

The circulation of air around this system is allowing air to spread from the Gulf of Mexico. A flow from this direction has a warming, moistening effect on the weather.

This is even more the case this year, as the sea surface temperatures in the western and central parts of the Gulf are up to 2 degrees Celsius above average.

Temperatures in many parts of southern Texas exceeded the landmark 100 Fahrenheit mark (38C) on 23 February, with a maximum of 107F (41.6C) at Falcon Lake, close to the Mexican border. This compares with a late February average maximum of 20C (68F).

The warm air has spread across the Midwest and into New England. In the last few days, all-time February highs have been recorded in the states of Vermont and New York.

As recently as Friday, Boston, Massachusetts, recorded a temperature of 21.5C, the highest February temperature in a database which began in 1872.

As grass, usually frozen solid, begins to grow and flowers bloom, there are concerns about the risk of flooding from snowmelt. Across eastern Vermont and the Adirondacks, there could be the equivalent of 100mm of floodwater produced by melting snow.

The warm weather will continue for a few days before colder air returns and the weather starts to settle in a more familiar pattern in March. 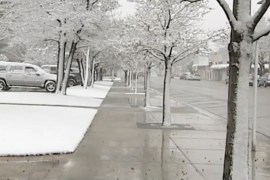 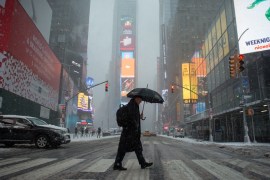 Heavy snow and extreme winds cancel flights, close schools and cause power outages in parts of northeastern US. 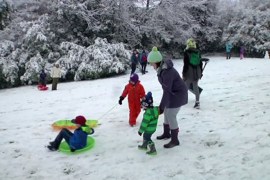