Dhaka, Bangladesh – A UN group has called on the Bangladesh government to “immediately reveal the whereabouts” of three sons of opposition leaders it says were kidnapped six months ago, while sounding a warning on rising enforced disappearances.

In each case, there were multiple witnesses. But in all three events, police deny any involvement.

The United Nations Working Group on Involuntary and Enforced Disappearances said on Friday that in total now, more than 40 people have been “disappeared”.

In a statement, the expert UN panel said the government should “halt an increasing number of enforced disappearances”.

“Enforced disappearance is a heinous crime and an offence to human dignity and no circumstances whatsoever may be invoked to justify it,” the statement said, appealing to Sheikh Hasina’s government to “take action now”.

Chowdhury, Quasem and Azmil are linked to either the opposition Bangladesh Nationalist Party or Jamaat-e-Islami, and each of their fathers has been convicted and executed by the Bangladesh’s International Crimes Tribunal (ICT).

The ICT was set up in 2010 to investigate and prosecute those accused of crimes during the country’s war of independence in 1971.

Bangladesh authorities have repeatedly denied any involvement or knowledge of their whereabouts.

Toby Cadman, a UK lawyer acting for the families of the three men, told Al Jazeera that he understands the men are currently held by the military intelligence agency, the Directorate General Forces Intelligence (DGFI), in Dhaka.

“The reality is that all three individuals have been unlawfully abducted in strikingly similar circumstances and, to date, the government has denied all knowledge of their whereabouts and refused to comment. They should be immediately released,” Cadman said.

Attempts by Al Jazeera to contact the DGFI to respond to Cadman’s claim were not successful.

Lord Carlisle, a member of the British House of Lords, has also issued a statement criticising the alleged detention of the three men.

“These individuals have now been missing for some six months without access to their families, without access to a lawyer, and without having had their detention authorised or supervised by the courts,” he said.

“The rule of law has effectively broken down in Bangladesh. Security forces are acting with impunity, and the executive [branch] is failing to fulfil one of its central obligations as a government, in that it is failing, or refusing, to protect its own citizens, regardless of political affiliation.” 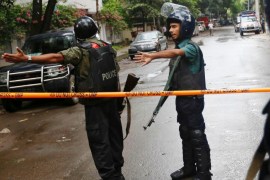 Witnesses say the sons of three former politicians, including a deceased Jamaat head, are in state detention. 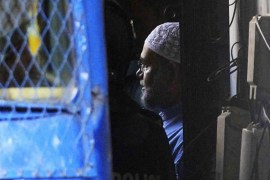 Mir Quasem Ali was hanged after being convicted for offences committed during 1971 war with Pakistan.