The South African government has called for calm after a wave of xenophobic violence in which dozens of shops and houses owned by immigrants have been torched and looted.

Attacks against foreigners and foreign-run businesses have erupted regularly in recent years in South Africa, fuelled by the country’s high unemployment levels and dire poverty.

In the past week, more than 20 shops have been targeted in Atteridgeville, outside Pretoria, while residents in Rosettenville, south of Johannesburg, attacked at least 12 houses.

Many locals have alleged that the targets were brothels and drug dens being run by migrants from elsewhere in Africa, including Nigeria and Zimbabwe.

Nigeria on Thursday said that it had summoned South Africa’s ambassador to register its fears about a fresh wave of violence against immigrants.

The Nigerian government this week called for the African Union to step in to stop “xenophobic attacks” on its citizens in South Africa, claiming 20 Nigerians were killed last year.

South African authorities dismiss such numbers, saying many violent deaths in the country are due to criminal activity rather than anti-immigrant sentiment.

A march protesting against migrants is due to be held in Pretoria on Friday, raising fears of violence in the city centre.

“I wish to appeal to all South Africans to desist from rhetoric or actions that are xenophobic,” Home Affairs Minister Malusi Gigaba told a press conference.

“There are renewed incidents of violence against foreign nationals in Rosettenville and Pretoria West,” he admitted, blaming a lack of jobs and alleged “drug peddling and prostitution” involving foreigners.

The UN’s International Organization for Migration (IOM) said it was “very concerned” about the march on Friday.

“We condemn the attacks, looting and burning of property owned by foreign nationals and call on citizens to refrain from … taking the law into their own hands,” it said.

“There is no evidence that foreign nationals are responsible for the rise in crime and unemployment.”

Gigaba said that South African authorities were in talks with organisers of Friday’s march, and that the police would ensure there was no violence.

The Right2Know civil action group and other campaigns have called for the event to be cancelled.

Meanwhile, in the Nigerian capital Abuja, about 100 demonstrators gathered outside the offices of two South African companies, telecoms giant MTN and satellite TV provider DSTV, to protest at the violence against immigrants.

An MTN spokesman was quoted by the Reuters news agency as saying that the offices were attacked and vandalised during the protest. 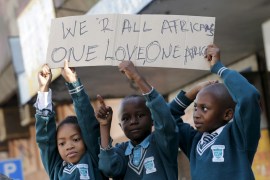 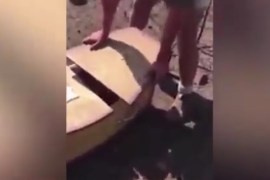 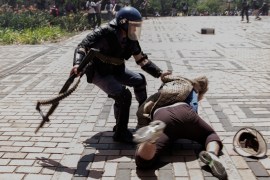 Attempt to reopen Witwatersrand University leads to clashes between police and students angered by education costs.