The White House overturned protections for transgender students that required public schools to allow them to use bathrooms and locker rooms matching the gender with which they identify.

With the move, President Donald Trump – who indicated during his campaign that he might protect LGBT rights – has sided with social conservatives on a key issue at the centre of a broader cultural battle between conservatives and liberals.

By lifting federal guidelines issued by the Obama administration – interpreting Title IX, the federal law banning sex discrimination in schools, to include gender identity – the Trump administration is leaving it up to states and school districts to decide whether students should have access to bathrooms that do not reflect their biological sex.

The justice and education departments said in a joint statement late on Wednesday that they “withdrew guidance for educational institutions, issued in 2015 and 2016, that took the position that the prohibitions in Title IX of the Education Amendments of 1972 and implementing regulations against discrimination on the basis of sex require access to sex-segregated facilities on the basis of gender identity rather than biological sex.”

In a two-page guidance letter to public schools, the White House said that the existing guidance did not “contain extensive legal analysis or explain how the position is consistent with the express language of Title IX, nor did they undergo any formal public process.”

The decision comes after a reported disagreement over the language between Attorney General Jeff Sessions, a major opponent of the LGBT rights movement, and Education Secretary Betsy DeVos, who is said to support LGBT rights and had to sign off on the move.

DeVos said in a statement on Wednesday that “the department’s Office for Civil Rights remains committed to investigating all claims of discrimination, bullying and harassment against those who are most vulnerable in our schools”.

Wednesday’s decision reverses memos issued by the Obama administration during the past two years saying that prohibiting transgender students from using facilities that reflect with their gender identity violates federal anti-discrimination laws.

The memos came after the state of North Carolina passed a law requiring transgender people to use restrooms corresponding to the gender on their birth certificates in schools and government buildings.

That action prompted the “bathroom wars” issue over transgender identity and a boycott of the state by companies, sports teams and others.

But the Trump administration argued that the reversal was simply aiming to stop a “federal over-reach” and protections for transgender people are still in place.

“During his presidential campaign and indeed since he has been in office, Trump has been saying that the transgender initiative launced by President Obama, in the form of guidance issued to schools throughout the country, was in fact an over-reach by the federal government,” said Al Jazeera’s Mike Hanna, reporting from Washington DC.

“The argument has been that the states and schools themselves are much better placed than a national institution to actually decide how to handle the issue of transgender people.

“The administration makes clear at this particular point that this does not mean that protection for transgender children has been withdrawn, it says that those protections are still very strongly imposed.”

But Wednesday’s decision prompted a flood of criticism from human rights and other groups.

This is what democracy looks like: hundreds outside of the White House to tell transgender students we've got your back. #protecttranskids pic.twitter.com/KYIeBwvlBO

Mara Keisling, the executive director of the National Centre for Transgender Equality, told reporters that the move was “simply and dangerously wrong and incorrect”.

“Revoking the guidance shows that the president’s promise to protect LGBT rights was just empty rhetoric,” James Esseks, the American Civil Liberties Union LGBT project director, said in a statement. “But the bottom line is that this does not undo legal protections for trans students, and school districts can and must continue to protect them and all students from discrimination.”

“School districts that recognise that should continue doing the right thing; for the rest, we’ll see them in court,” he added.

The US Supreme Court is due next month to consider the case of a 17-year-old in Virginia who was born a female but identifies as a male and filed a suit to be able to use the boys’ bathroom at his high school. 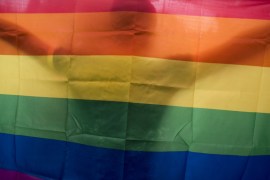 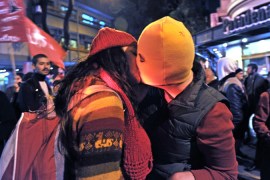