Iraqi special forces have begun an assault against ISIL on a sprawling military base south of Mosul, adjacent to the city’s airport.

Two Iraqi special forces officers told AP news agency that their troops have reached the edge of the Ghazlani base on the city’s southern rim on Thursday morning and that clashes there were still under way.

A federal police officer said his forces are also pushing toward the Mosul airport. All officers spoke on condition of anonymity because they are not authorised to talk to reporters.

The advances come days after Iraqi forces officially launched the operation to push Islamic State of Iraq and the Levant group (ISIL, also known as ISIS) out of Mosul’s western half.

US special operations forces are embedded with some Iraqi units and thousands of US troops are in Iraq providing logistical and other support.

US Secretary of Defense Jim Mattis was holding discussions with US and Iraqi officials, a week before he is expected to present a new strategy to President Donald Trump for defeating ISIL.

Trump has repeatedly vowed to eliminate the group but has provided few details about how his approach might differ from that of the Obama administration, which had partnered with Syrian and Iraqi forces to drive ISIL out of several towns and cities.

The battle for western Mosul, the group’s last major urban bastion in Iraq, is expected to be the most daunting yet.

The presence of up to 750,000 civilians also poses a challenge. 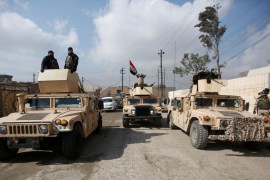