Speaking to reporters on Thursday after closed-door meetings with US Secretary of State Rex Tillerson and Homeland Security chief John Kelly, Videgaray said it is “a complex time” for Mexican-US relations.

“There exists among Mexicans worry and irritation about what are perceived to be policies that could be harmful for the national interest and for Mexicans here and abroad,” Videgaray said, looking stern as he stood beside the US officials.

Relationships between the two countries have gone downhill quickly since Trump’s win at the US presidential election in November.

Washington this week angered its southern neighbour by saying it was seeking to deport many undocumented immigrants to Mexico if they entered the United States from there, regardless of their nationality.

The immigration guidelines are the latest point of tension between neighbours that have also been at odds over Trump’s vow to build a wall on the border and his attempts to browbeat Mexico into giving concessions on trade.

For their part, Kelly and Tillerson sought to cool tempers as they adopted a more measured tone than either the Mexicans or Trump, who on Thursday said a military operation was being carried out to clear “bad dudes” from the US.

Kelly said there would be “no use of military force in immigration operations,” and “no, repeat, no mass deportations”.

None of the US officials made direct references to the deportation of immigrants from third countries to Mexico, or to paying for the border wall planned by Trump, a red-flag issue for Mexico.

Both sides at the Mexico City talks on Thursday pledged further dialogue on migration, trade and security issues facing both nations.

Al Jazeera’s John Holman, reporting from Mexico City, said Mexico has been criticised as “timid” in confronting issues with the US in the past, but since Trump came into office it has grown “tougher”.

“Usually, this is a quiet and cordial meeting. That’s how it has been for decades. But not under the administration of Donald Trump,” Holman said.

Earlier on Thursday, Trump continued blasting Mexico for what he claims is an unfair trade relationship with the US.

“We’re going to have a good relationship with Mexico, but if we don’t, we don’t,” Trump said at a White House meeting with business leaders.

The talks in the Mexican capital followed the cancellation of a planned visit by Pena Nieto to the White House, after Trump followed through on his pledge to  order the construction of a border wall  along the US southern border and declare that Mexico will pay for the wall.

The neighbouring countries have also clashed over trade, with Trump calling for a renegotiation of NAFTA, the North American free trade agreement.

During his meeting with business leaders on Thursday at the White House, Trump complained about the $70bn trade deficit with Mexico and the loss of American manufacturing jobs, since NAFTA was adopted more than 20 years ago.

“The deals we have with other countries are unbelievably bad,” Trump said.

In response to Trump’s threats on trade, Mexican Economy Minister Ildefonso Guajardo said on Thursday morning that his country could slap tariffs on US goods if renegotiations over trade fail.

Guajardo said he expected NAFTA negotiations with US and Canada to conclude by the end of 2017. 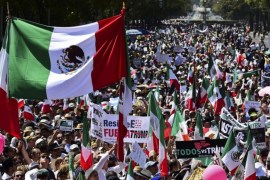 Marches get under way in some 20 cities across country to protest US President Trump’s anti-Mexican rhetoric. 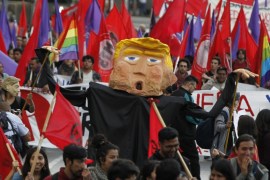