The publisher behind far-right commentator Milo Yiannopoulos has cancelled his planned book, Dangerous.

Simon & Schuster’s announcement on Monday came hours after the Breitbart editor was disinvited to this year’s Conservative Political Action Conference because of past comments about relationships between boys and men.

In audio from a podcast, Yiannopoulos, 33, can be heard describing sexual consent as “arbitrary and oppressive”.

“In the homosexual world particularly, some of those relationships between younger boys and older men, the sort of coming-of-age relationships, relationships in which those older men have helped those young boys to discover who they are and give them security and safety and provide them with love and a reliable – and sort of a rock, where they can’t speak to their parents,” Yiannopoulos is heard saying on the Drunken Peasants podcast.

Documented on a new video from the podcast makers, he is also heard jokingly defending “priest molestation”.

Simon & Schuster and its Threshold Editions imprint said that “after careful consideration” they had pulled the book, which was the subject of intense controversy.

Until Monday, Simon & Schuster had defended the book.

In December, the publisher asked readers to “withhold judgment until they have had a chance to read the actual contents of the book”.

Yiannopoulos, who was reportedly paid a six-figure advance for the memoir to the tune of around $250,000, was permanently banned by Twitter in July 2016 for racist abuse targeting the Ghostbusters actor Leslie Jones.

Taking to his Facebook page, Yiannopoulos wrote: “They canceled my book.” In a later post, he said: “I’ve gone through worse. This will not defeat me.”

“Dangerous” was originally scheduled to come out in March, but Yiannopoulos had pushed back the release to June so he could write about the uprisings during his recent campus tour.

‘They were fine with his racism’

More than 100 Simon & Schuster authors had objected to his book deal.

Author Roxane Gay withdrew a planned book with the publisher.

On Monday, she said she would continue her protest and not return to Simon & Schuster.

“When his comments about pedophilia/pederasty came to light, Simon & Schuster realised it would cost them more money to do business with Milo than he could earn for them. 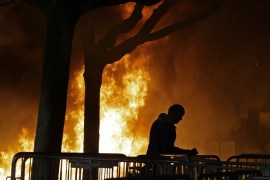