Partial results are giving a clear lead to the hand-picked candidate of socialist President Rafael Correa in Ecuador’s presidential election, seen as a test for the left in Latin America after recent conservative gains in the region, especially in Brazil and Argentina.

With more than 81.4 percent of polling stations counted, ruling party candidate Lenin Moreno had almost 39 percent of the votes, compared to just under 29 percent for former banker Guillermo Lasso, the closest contender among seven opposition candidates.

To avoid a runoff, Moreno needed to win a majority of the total vote, or get 40 percent while holding a 10-point lead over his nearest rival.

“The government candidate, Lenin Moreno, declared victory in the first round, even before the official results come out,” said Al Jazeera’s Daniel Schweimler reporting from Quito.

“His supporters came out on to the streets and began celebrating, but that claim was immediately challenged by his right-wing rival, Lasso.”

Given the tight race, electoral authorities decided against announcing a quick count of results and instead appealed for patience as official results came in. But a count of statistically representative tally sheets nationwide by a respected private group said would Moreno finish on top with 38.8 percent to 28 percent for Lasso, with a 1-point margin of error.

But the opposition candidate showed no sign of throwing in the towel, as hundreds of Lasso supporters gathered outside the National Electoral Council, saying they would remain there until a runoff was confirmed.

“Lasso has been out saying that he is very confident about a second round win, and he quite possibly has a point because the supporters of the six candidates that seem to be eliminated from the race are more likely to support the right-wing candidate,” Schweimler said.

“This indicates the formation of a right-leaning government along the lines of what we have already been seeing in elsewhere in Latin America.”

The outcome was indeed being watched closely in Latin America, where conservative leaders in Argentina, Brazil and Peru have assumed power in the past 18 months after the end of a commodities boom that boosted leftists like Correa.

Outside the region, much of the interest in the election focused on what the outcome might mean for WikiLeaks founder Julian Assange, who has been living at the Ecuadorean Embassy in London since 2012.

Moreno has indicated he would allow Assange to remain while Lasso vowed to evict the Australian activist within 30 days of taking office.

The contest put Correa’s legacy on the line, as well. The self-declared 21st-century socialist, who took office in 2007, ushered in a period of stability after a severe economic crisis that saw three presidents toppled in protests and the adoption of the US dollar to control rampant inflation.

While Correa has been praised for reducing inequality and overhauling Ecuador’s infrastructure, opinion polls said a majority of Ecuadoreans favour change.

Formerly flush government budgets have been slashed and thousands of people at state-run companies laid off, as oil revenues in the OPEC nation declined.

The International Monetary Fund (IMF) expects Ecuador’s economy to shrink 2.7 percent this year, and analysts predict the new president will have to seek a bailout from the Washington-based IMF to address financial problems made worse by last year’s earthquake.

Moreno urged voters to uphold Correa’s “Citizens’ Revolution”, while his challengers vowed to eliminate taxes they contend hamper growth and to strengthen democratic institutions they say were weakened by Correa’s leadership. 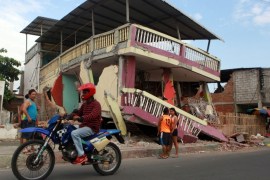 Tremors and aftershocks leave about 12,500 injured and another 58 missing while destroying 7,000 buildings.