Ecuador has voted in general elections that could see the country move from the left to the right like several other South American countries in recent months.

Voters cast their ballots on Sunday for 137 members of the national assembly and a new president, choosing between a candidate who intends to continue President Rafael Correa’s platform or one of several more conservative contenders who pledge to attack corruption and cut taxes.

The polls were due to close at 22:00 GMT and the results were expected to start coming in shortly afterwards.

The outcome will be watched closely in Latin America.

Conservative leaders in Argentina, Brazil and Peru have assumed power in the past 18 months after the end of a commodities boom that boosted leftists such as Correa.

Outside the region, much of the interest in the election focuses on what the outcome will mean for WikiLeaks founder Julian Assange and his ability to remain at the Ecuadorian embassy in London.

Lenin Moreno, the ruling party candidate, who is Correa’s hand-picked successor, has indicated he would back Assange’s continued stay.

But his main challenger, former banker Guillermo Lasso, has indicated in interviews that he would evict the Australian activist within 30 days of taking office.

Socialism on the line

The contest put Correa’s legacy on the line as well.

The self-declared 21st-century socialist who took office in 2007 ushered in a period of stability after a severe economic crisis that saw three presidents toppled in protests and the adoption of the US dollar to control rampant inflation.

While Correa has been praised for reducing inequality and overhauling the nation’s infrastructure, polls show a majority of Ecuadorians favour change.

Formerly overflowing government budgets have shrunk and thousands of people at state-run companies laid off as oil revenues in the OPEC nation decline.

Analysts predict that the next president will have to seek rescue from the Washington-based lender to help with financial problems made worse by last year’s 7.8 magnitude earthquake. 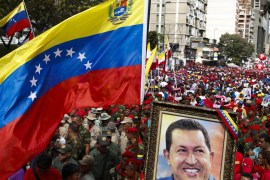