The husband of Spain’s Princess Cristina has been sentenced to more than six years in prison on charges including fraud and tax evasion, while the royal wife has been acquitted.

A panel of judges ruled on Friday that Cristina, the sister of King Felipe VI, was not guilty, but she would be required to pay more than $280,000 in fines because the court considered that she indirectly benefited from her husband Inaki Urdangarin’s fraud.

The couple were not called to court for the ruling. Both have lived in Switzerland with their four children since 2013, and have always denied any wrongdoing.

Miquel Roca, a lawyer with Cristina’s defence team, said that the princess was “satisfied for the acknowledgement of her innocence” but that she was still convinced that her husband was not guilty.

“If we believed in the judicial system when the princess was made to sit in the dock, I think citizens can trust in it when she’s absolved,” Roca said in Barcelona.

A spokesperson for the Royal House told Spanish media that the royal family respected the court’s decision.

There were no immediate comments from Felipe and Queen Letizia, who received news of the ruling during a visit to a museum in Madrid with the Hungarian president.

The case can be appealed to the Supreme Court, but it was not clear whether Urdangarin would choose to do so.

Urdangarin, a former Olympic handball player, had used his royal connections to win public contracts to put on events through his non-profit organisation, the Noos Foundation, then overcharged for the events and hidden millions of dollars in proceeds abroad, according to prosecutors.

Some of the foundation’s money was transferred to a private company and used to pay for family holidays, home furnishings and theatre tickets, prosecutors said.

The trial, and the long investigation that preceded it, had been closely followed in a country inured to high-level political and banking corruption cases, and where inequality has grown in the wake of the 2008 financial crisis.

The inquiry heightened the impression among Spaniards that the royal family was out of touch with ordinary people just as Spain was suffering its worst recession of modern times.

Public support for the family eroded further when it emerged that King Juan Carlos had gone on an elephant hunting expedition in Africa at the height of the financial crisis. He abdicated in 2014 in favour of his son.

When he ascended the throne, Felipe removed his older sisters, Elena and Cristina, from royal duties as part of efforts to modernise the monarchy.

The following year he stripped Cristina of her title of Duchess of Palma. 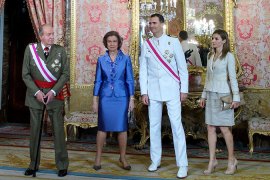 What future for the monarchy in Spain?

Thousands want the monarchy abolished and the return of a republic after King’s abdication. 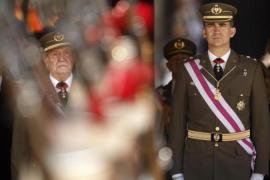 Reign in Spain: Can Felipe save the monarchy?

The crown prince may lack his father’s charisma, but perhaps a more ‘professional’ king is what the country needs now. 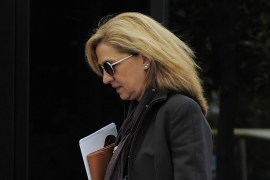 King Felipe VI strips his sister of her title as Duchess of Palma de Mallorca as she awaits trial for tax fraud.