Donald Trump was informed that his national security adviser had misled his vice president about contacts with Russia just six days into his presidency.

Flynn was interviewed by the FBI about his telephone conversations with Russia’s ambassador to the United States, a sign his ties to Russia had caught the attention of law enforcement officials.

But in the White House’s retelling of Flynn’s stunning downfall, his error was not that he discussed US sanctions with the Russian before the inauguration – a potential violation of a rarely enforced law – but the fact that he denied it for weeks, apparently misleading Pence and other senior Trump aides about the nature of the conversations.

White House officials said that they conducted a thorough review of Flynn’s interactions, including transcripts of calls secretly recorded by US intelligence officials, but found nothing illegal.

Pence, who had vouched for Flynn in a televised interview, is said to have been angry and deeply frustrated.

“The evolving and eroding level of trust as a result of this situation and a series of other questionable incidents is what led the president to ask General Flynn for his resignation,” White House spokesman Sean Spicer said on Tuesday, a day after the president asked Flynn to leave.

Flynn, in an interview with The Daily Caller News Foundation, said on Monday “there were no lines crossed” in his conversations with Russian Ambassador Sergey Kislyak.

The explanation of the episode left many questions unanswered, including why Trump didn’t alert Pence to the matter and why Trump allowed Flynn to keep accessing classified information and taking part in the president’s discussions with world leaders up until the day he was fired.

White House officials also struggled to explain why Trump’s counsellor Kellyanne Conway had declared the president retained “full confidence” in Flynn only hours before the adviser had to submit his letter of resignation.

Current and former US officials, who spoke to the Times anonymously, said they found no evidence that the Trump campaign was working with the Russians on hacking or other efforts to influence the election.

The White House shake-up, less than a month into Trump’s tenure, marked another jarring setback for a new administration already dealing with tensions among top aides and a legal fight over the president’s travel ban order.

Democrats called for investigations into Flynn’s contacts, and Republican Senator Lindsey Graham said Congress needed to know whether he had been acting with direction from the president or others. 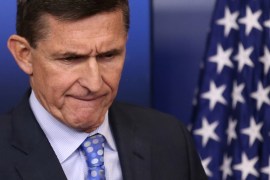 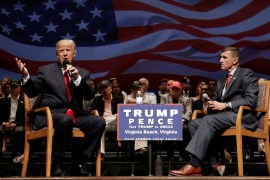