A suicide bomber detonated a pick-up truck packed with explosives in northern Baghdad on Wednesday, killing at least nine people, according to Iraqi officials.

Thirty more were wounded in the powerful blast in the Habibiya area, near Sadr City, a Shia-majority neighbourhood in the Iraqi capital.

The explosion targeted a crowded street full of garages and used car dealers.

The attack came a day after a car bomb explosion in southern Baghdad killed at least four people.

The Iraqi capital was rocked by a wave of deadly suicide bombings during the first days of 2017 but relatively few explosions had been reported since.

IN PICTURES: Fighting the flames of ISIL in Iraq

There was no immediate claim of responsibility for Wednesday’s blast, but nearly all suicide attacks are claimed by the Islamic State of Iraq and the Levant (ISIL, also known as ISIS) armed group.

On January 2, ISIL, which often targets crowded areas to maximise casualties, claimed responsibility for a suicide car bombing that killed 39 people in a busy market in Sadr City.

ISIL is defending Mosul, its last major stronghold in Iraq, against a massive, four-month-old operation by an alliance of forces. 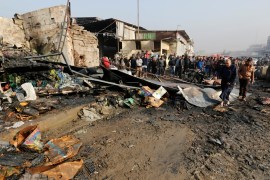 Bombers strike Shia areas in Iraq’s capital also wounding 50 others with one attack claimed by the armed group ISIL.

At least 12 killed and 50 others wounded in blast that hits Shia neighbourhood in the Iraqi capital.