The Christian governor of Indonesia’s capital, Jakarta, is heading for a tough run-off against a Muslim opponent, according to unofficial counts, following a divisive election campaign marred by religious intolerance and racial bigotry.

More than 13,000 polling stations opened across Jakarta on Wednesday to accommodate the 7.1 million people eligible to vote, one of dozens of elections taking place across the Muslim-majority country.

The other candidate, Agus Yudhoyono, the son of former President Susilo Bambang Yudhoyono, was in third place with 16.78 percent.

A candidate needs to get more than 50 percent of the votes in the first round to win outright.

Officials are expected to announce the final results in about two weeks, while a second round will be held is April.

Ahok, an ethnic Chinese Christian, has been dogged by a blasphemy case following comments he made about the Quran that were deemed insulting to Islam and Muslims.

In September, he told a crowd of his supporters that if they were afraid of going to hell if they elected a non-Muslim as their leader, they need not worry as they had been lied to “using Surah Al-Maidah verse 51”.

Some Muslims interpret the Quranic verse in question as prohibiting them from electing non-Muslims as their leaders.

Ahok has denied that he intended to insult the Quran, saying he was referring to those who misused religion for political purposes.

After two massive protests by conservative Muslims, he was charged and is now on trial for blasphemy, though he remains free to contest the poll.

“It has been a polarising election here for the highest office in Indonesia’s capital,” Al Jazeera’s Step Vaessen, reporting from a polling station in Jakarta, said.

“With religion playing an unprecedented role, many fear that the outcome has not only been determined by the quality of the candidate but also by his beliefs.”

The campaign period was also marked by rising anti-Chinese sentiment sparked by false news spreading online, including rumours that millions of Chinese were coming to Indonesia illegally.

Ahok has won praise from many Jakartans for cleaning up rivers clogged with rubbish, as part of his flood prevention programme, and building more parks.

“With around 10 million people, Jakarta is one of Asia’s most densely populated cities,” Vaessen said.

“The capital battles yearly flooding and daily traffic congestion. Before Ahok’s blasphemy trial, his approval ratings for tackling problems was more than 70 percent.”

But Ahok’s critics say his moves to evict squatters and slum dwellers to make way for development have increased poverty and caused dispossession.

Ahok’s closest rival, Baswedan, has courted the votes of conservative Muslims despite his past reputation as a liberal Muslim reformer.

Support from conservatives rose after he visited the headquarters of the Islamic Defenders Front, whose leader, Muhammad Rizieq Shihab, was a key member of the anti-Ahok protests. 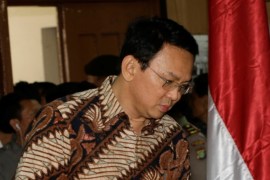 Judges reject call to strike down case against Basuki Tjahaja Purnama, a Christian accused of insulting the Quran.