Four suspected rebels, two Indian army soldiers and one civilian were killed in a gun battle in a village in India-administered Kashmir on Sunday, an army spokesman said.

The suspected rebels were hiding in a south Kashmir village when the army and police surrounded it, a police official said.

In the ensuing fire fight four suspected fighters and two soldiers were killed.

“Two soldiers were also martyred and three injured during the encounter,” he added.

WATCH:  Is self-determination on the cards for Kashmiris?

A civilian, the young son of the owner of the house in which the suspected rebels were hiding, was also killed, Jammu and Kashmir police chief S P Vaid told AFP news agency.

Three men managed to escape, a superintendent of police, who declined to be identified, told AFP.

Kashmir has been divided between India and Pakistan since they won independence from Britain in 1947. Both claim the Himalayan territory in its entirety.

Several rebel groups have for decades fought the 500,000 Indian troops deployed in the region, demanding independence or a merger of the territory with Pakistan.

The fighting has left tens of thousands, mostly civilians, dead. 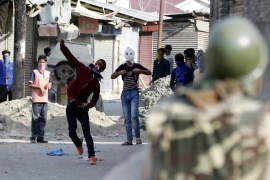