Extreme heat has been rolling out of Australia’s interior this week with temperatures easily reaching the mid to high 40s.

While the heatwave is over now for the central part of Australia, it was still very much a concern for parts of Queensland and New South Wales (NSW) on Saturday.

On Friday, Sydney Airport broke a record for the warmest February temperature, reaching a high of 42.9 degrees Celsius. This exceeded the previous record of 42.6C in 1980.

With the heat comes the inevitable danger. Australian emergency services braced for “potentially catastrophic” fire conditions on Saturday. Fifty bushfires were already blazing across NSW and with temperatures expected to reach as high as 48C, firefighters were expecting more outbreaks.

As a precaution, bans on outdoor fires had been put in place.

The national energy grid was also being watched carefully as the demand for electricity continued to rise throughout the week. Luckily, the threat of rolling blackouts had been averted as several large businesses across NSW cut back on their energy consumption or switched over to diesel generators.

To get some relief from the heat, thousands of people headed to Sydney’s beaches over the last few days, but were warned by lifeguards stay close to shore and keep hydrated.

On Sunday, there is some much-needed relief coming. A cold front will move through later in the day bringing with it milder and more seasonable temperatures. 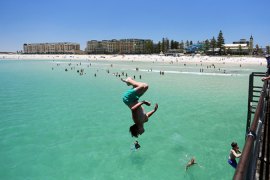 After killing at least one person in Perth, the extreme weather spreads east. 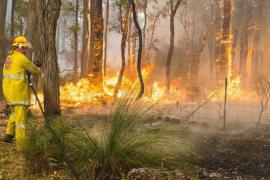