South Africa’s parliament has witnessed chaotic scenes, with opposition MPs denouncing President Jacob Zuma as a “scoundrel” and “rotten to the core” because of corruption allegations, and then clashing with guards who dragged them out of the chamber.

The events of Thursday unfolded on national television as opposition legislators tried to stop Zuma from addressing the chamber, repeatedly insulting him and declaring him unfit for office.

In the surrounding streets of Cape Town, police and hundreds of military forces patrolled to guard against protesters who want Zuma, 74, to quit.

Security teams eventually were called into the chamber to remove red-clad members of the opposition Economic Freedom Fighters, some of whom threw punches and beat guards with plastic helmets.

Politicians from the Democratic Alliance, the country’s biggest opposition group, then walked out in protest.

Some members of the ruling African National Congress (ANC) party heckled them as they left.

“Finally,” said Zuma as he started an annual address on the economy and other national matters.

Al Jazeera’s Tania Page, reporting from Cape Town, said riot police had been deployed outside the parliament and stun grenades were heard going off nearby.

“The parliament session was a chaotic, shambolic spectacle broadcast live on the national television for South Africans,” she said.

“Disruptions in parliament have become something of a ritual, but tonight it reached quite unprecedented levels because there was quite a high level of violence involved.”

‘Rotten to the core’

A politically weakened figure, Zuma has faced calls to resign even from factions of the ruling party.

Some ANC members blame Zuma’s scandals for the party’s poor performance in local elections in August, in which it lost control of several key metropolitan areas.

Critics condemned an announcement by Zuma’s office that 441 members of the military would assist police in maintaining order during the speech and the opening of parliament.

The military has previously deployed for the event, but the security operation was among the largest in recent years.

While at least one group of protesters scuffled with police who blocked their path, the streets were mostly calm before the speech, in contrast to the events later in parliament.

Zuma is “rotten to the core”, said Julius Malema, leader of the EFF.

Other opposition legislators described the president as a “scoundrel” and a “constitutional delinquent.”

The hours leading up to Zuma’s speech featured the pomp associated with the annual opening of parliament, when dignitaries walk on a red carpet and pose for cameras in an impromptu fashion show.

Zuma has been under scrutiny for an allegedly improper relationship with the Guptas, a business family of Indian immigrants that has been accused of meddling in top government appointments.

He has denied wrongdoing.

Zuma, who took office in 2009, also reimbursed the state more than $500,000 in a scandal over upgrades to his private home.

Journalists say they're not being allowed to cover what's going outside, EFF MP injured, stun grenades going off outside. #SONA2017

Alex Vines, the head of the Africa programme at Chatham House, told Al Jazeera that Thursday’s brawl was “indicative of the disillusionment that’s growing of mainstream politics in South Africa”.

“It makes the decision on who the next leader of the ANC is so critical and some of the politics that we saw in the parliament today is playing into that kind of narrative. There will be some in the ANC who will be a bit embarrassed, but rather pleased with what just happened.” 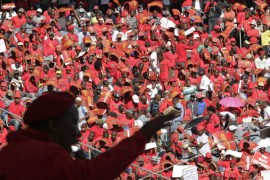 Malema’s temperament and confrontational political rhetoric has landed him in trouble. 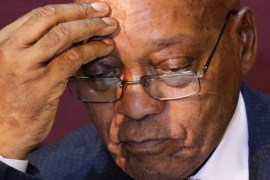 Will South Africa’s Jacob Zuma hang on to power?

There were calls from within the ruling ANC party for Zuma to resign amid public outrage over corruption accusations.