Israeli border police have clashed with Jewish settlers resisting the eviction of a hardline Jewish settlement outpost in the occupied West Bank after a court ruled the homes were built on private Palestinian land.

Police said on Wednesday they were “attacked by anarchists with materials that made their eyes burn,” adding that more than a dozen officers were “lightly wounded by stones and the liquids thrown at them”.

Youths confronted the forces with chants such as “How will you feel tomorrow after you evacuate a Jew from his home?” and “Today it’s me, tomorrow it will be you,” as police began evacuating them from the area.

At least four protesters were arrested.

Hundreds of officers marched into the Amona outpost near Ramallah on Wednesday, just hours after the Israeli government announced that another 3,000 more illegal homes would be built in occupied Palestinian territory.

The officers’ evacuation of Amona marked the end of months of attempts by government hardliners to legalise the outpost, and the approval over the past two weeks of nearly 5,000 new settler homes elsewhere in the occupied Palestinian territories was widely seen as a move to win their support.

There had been fears of violence after hundreds of hardline sympathisers of the settlers slipped past army roadblocks on foot and lit tyres around the outpost.

Some threw stones at the media, as residents started packing their belongings, an AFP correspondent reported.

Al Jazeera’s Imran Khan, reporting from the village of Taybeh in the occupied West Bank, which overlooks Amona, described fires being lit and smoke rolling down the hills.

“There are a number of people from surrounding settlements coming to support the settlers of Amona,” he said. “[Amona] is quite small. There are only about 40 houses there, but it really has become a symbol for the settler movement.”

As border police were inside Amona negotiating with the settlers to leave, Khan said that the settlers were threatening to return and “build on this land legally”.

“There will likely be a court challenge from the settlers,” Khan said.

The Israeli Supreme Court ruled three years ago that the Amona outpost was, by its standard, illegally built on stolen Palestinian land, and ordered it to be demolished.

Dozens of other unauthorised outposts – distinguished from Israeli government-sanctioned settlements that are also considered illegal by the international community – have been constructed throughout the occupied West Bank by settlers.

The Israeli government has generally tolerated them.

Meanwhile, the Israeli government has announced, in just the last two weeks, a string of new projects that will add more than 6,000 illegal homes for Jewish settlers in the occupied West Bank.

According to the defence ministry, 2,000 of the latest new homes are ready to be put on the market, while the rest are in various stages of planning.

Hanan Ashrawi, a member of the Palestinian Liberation Organization, said that “such a frenzied escalation of Israel’s illegal enterprise signals the final demise of the two-state solution”.

“We’re in a new era where life in Judaea and Samaria [the West Bank] is returning to its natural course,” said Defence Minister Avigdor Lieberman, who has himself long lived in an illegal West Bank settlement.

Since the January 20 inauguration of US President Donald Trump, Israel has approved the construction of 566 housing units in three settlement neighbourhoods of occupied East Jerusalem and 5,502 more elsewhere in the West Bank.

They had been frozen under pressure from the previous US administration of Barack Obama, which had warned that settlements could derail hopes of a negotiated two-state solution.

Trump has pledged strong support for Israel, and Netanyahu’s government has moved quickly to take advantage.

“We are building and we will continue building,” Netanyahu said last week.

The international community considers all Jewish settlements on occupied Palestinian land illegal and regards their construction as the biggest obstacle to a peaceful settlement of the conflict. 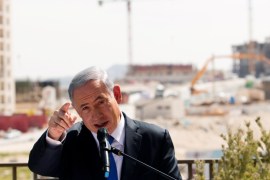