Temperatures remain well above average in the southwestern United States, and wildfires continue to burn across California. By stark contrast, a cold blast of Arctic air has brought unusually snowy weather into the southern states, along with parts of Mexico.

The rare snowfall across southern Texas knocked out power to thousands, caused numerous accidents along slick roadways and prompted the closure of schools.

The frigid temperatures came in behind a cold front and combined with moisture from the Gulf of Mexico to bring sleet and snow to communities along the border with Mexico on Thursday.

The cold snap brought snow to San Antonio, Corpus Christi, Houston and elsewhere. Temperatures dipped as low as minus 3 degrees Celsius on Friday morning in the Austin area. The average is nearer to plus 6C.

In Crystal City and Carrizo Springs, locals took advantage of the unusual weather by making small snowmen. The rare snowfall came just days after the area reported temperatures of 24C.

The surprisingly wintry weather extended all the way across the Deep South, with the National Weather Service reporting snow totals of 8 to 15cm in parts of the Jackson, Mississippi, area.

Dozens of schools were closed, some only after daybreak revealed a winter wonderland, and three universities postponed or delayed their classes.

South of the border, the intense cold plunge brought some hefty snowfalls into Mexico. Some of these northern and central parts of the country had not seen wintry precipitation in decades.

The snow was heavy enough to snarl traffic along highways in northern Mexico, leaving hundreds of vehicles stranded in mountainous regions.

The Mexican Meteorological Service warned that higher levels like the states of Nuevo Leon, Tamaulipas, Coahuila, Durango and Chihuahua will see temperatures dip as low as 5 degrees below zero Celsius. Even Mexico City will find temperatures falling close to freezing over the next few nights. 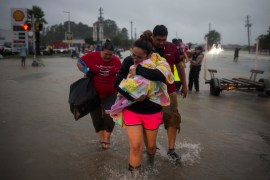 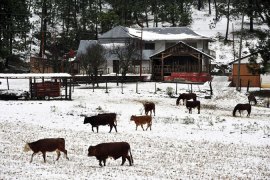 Torrential downpours and heavy snow causes disruption for many in Mexico