An opposition alliance between Nepal‘s two, major communist parties has a strong lead in landmark post-war parliamentary and provincial elections, according to preliminary results.

Nepal’s Election Commission said on Saturday that the coalition between the Communist Party of Nepal – United Marxist Leninists (UML) and the former Maoist rebels won 43 seats in the federal parliament, and was leading in 72 other constituencies.

The ruling Nepali Congress won only six seats, according to early tallies.

In the federal parliament, 165 seats are directly elected and 110 are allocated to parties based on proportional representation.

The vote, which took place in two phases in November and December, is the first parliamentary election since 1999, and comes two years after the approval of a new constitution.

It lays the groundwork for Nepal’s transition to a democracy, after the end of a civil war in 2006 and the abolition of the country’s 239-year-old Hindu monarchy two years later.

The final result may not be known until mid-December, according to officials. Turnout stood at 67 percent among the 15 million eligible voters.

Nepal has seen 10 government changes in as many years. 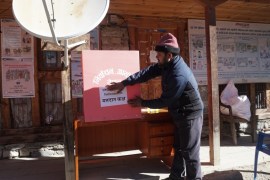 Nepalese vote in parliamentary and provincial elections to choose a new government to conclude democratic transition.

Parliamentary and provincial assembly elections expected to lay groundwork for Nepal’s transition into a federal state.