Yemen’s President Abd-Rabbu Mansour Hadi has urged Yemenis to rise up against the Houthi rebels as violence further escalated in the capital, Sanaa, following the assassination of the country’s former leader, Ali Abdullah Saleh.

Hadi called for a “new page” in the battle against the Houthis in a speech carried live on Saudi Arabia’s Al Arabiya TV late on Monday.

“Let’s put our hands together to end the control of these criminal gangs and build a new united Yemen,” the leader of Yemen’s internationally recognised government said from Riyadh, where he lives in exile.

His predecessor, Saleh, who had ruled Yemen for three decades before his overthrow in 2011, was killed in a rocket-propelled grenade and gun attack on his car at a checkpoint outside Sanaa.

The Houthis said Saleh was killed for “treason” after he cut ties with the rebels in favour of the Saudi-led coalition.

The Arab League condemned Saleh’s killing on Tuesday and branded the Houthis as a “terrorist organisation”.

“All means must be used to rid the Yemeni people of this nightmare,” said Ahmed Abdul Gheit, who heads the pan-Arab bloc.

Hakim al-Masmari, the editor of the Yemen Post newspaper, told Al Jazeera that at least nine civilians were killed and many more injured.

“There’s been more than a dozen air strikes in Sanaa from midnight until the morning. Many houses have been destroyed, especially in the city centre near the presidential palace,” Masmari said.

The city remained tense, he continued, adding: “The Houthis are on high alert right now and expecting attacks on checkpoints and leaders. Any signs or pictures that can identify them as Houthis, on their clothes and vehicles, have been removed to ensure they are not targeted.”

Hussain Albukhaiti, a Houthi activist, told Al Jazeera the air raids were targeting “every area controlled by the Houthis in Sanaa”.

He added, “We are hearing multiple warplanes roaming the sky, and the strikes at one point rained down every five minutes or so.”

Stephane Dujjaric, a UN spokesman appealed for a pause in fighting on Monday in order to help civilians caught up in the violence.

“We find the events unfolding there to be deeply disturbing with ground clashes and air strikes having dramatically escalated in Saana and in surrounding governors,” he said, adding that aid flights in and out of the city had been suspended.

Humanitarian workers were receiving desperate calls for help, but were not able to reach trapped families, he said.

“We remind all parties to the conflict that deliberate attacks against civilians and against civilian and medical infrastructure are clear violations of international humanitarian law and may constitute war crimes,” Dujjaric said.

The war in Yemen, now in its second year, has left thousands dead and led to one of the world’s worst humanitarian crises. About 7 million people are facing starvation and one million people have been infected with cholera. 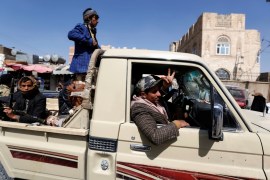 Abdul Malik al-Houthi lauds ousted leader’s death at the hands of his fighters as victory against Saudi-led coalition. 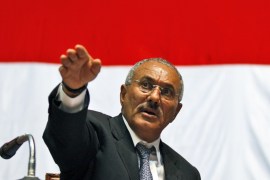 How did Yemen’s Houthi-Saleh alliance collapse?

The UAE was behind the former president’s decision to turn his back on Houthi rebels, officials say.