Ali Abdullah Saleh, the overthrown Yemeni leader, has been killed by Houthi rebels near the country’s capital Sanaa, according to officials from his own political party.

His death comes amid an intensified conflict between the Iran-aligned armed group and pro-Saleh forces and it is expected to have major implications for the ongoing war in Yemen.

The Houthi and Saleh-linked forces were allies before Saleh called for a dialogue with their rivals, a military coalition of Arab states led by Saudi Arabia.

Here is a look at some key points in Yemen’s recent history.

December 4, 2017: Ali Abdullah Saleh was killed by Houthi rebels near the capital Sanaa, party officials said, two days after he publicly broke off ties with the group and expressed his openness to talks with the Saudi Arabia-led coalition.

November 10, 2017: Aid agencies warn of mass starvation in Yemen, with more than 20 million people said to be in urgent need of food.

August 24, 2017: Saleh stages a mass rally in the capital, Sanaa, with thousands turning out in a major show of public support. The rally comes amid a public rift between the former president and the Houthi rebels who are in control of much of country.

July 1, 2017: At least 1,500 people have died and more than 246,000 others have been affected by a cholera outbreak in Yemen, according to the World Health Organisation.

April 26, 2017: The UN warned that 17 million Yemenis are in immediate danger of dying of starvation unless the world delivers immediate humanitarian assistance.

March 18, 2017: At least 42 Somalis were killed after a helicopter gunship attacked a boat near Yemen.

January 30, 2017: At least 10 Yemeni women and children were killed in a US military operation – the first under President Donald Trump – in the southern province of al-Bayda. The US military says it killed 14 members of Al-Qaeda in the Arabian Peninsula (AQAP).

October 29, 2016: Three weeks into a cholera outbreak in the war-torn country, the WHO said at least 1,410 cases were detected.

October 9, 2016: At least 140 people were killed and more than 500 wounded after several air raids on a funeral reception in the Yemeni capital Sanaa. The pro-Houthi Saba news agency said the raids were carried out by the Saudi-led coalition.

August 30, 2016: ISIL claims bombing at an army training camp in Yemen’s port city of Aden that killed at least 70 people. The UN announced that the death toll from the war in Yemen has risen to more than 10,000 people.

August 7, 2016: UN-sponsored talks to establish peace in Yemen collapsed and fighting resumed once more between Houthi rebels and pro-government forces.

July 29, 2016: The UN criticised an agreement signed between Saleh and Houthi rebels to form a political council to run the country.

April 24, 2016: UN-brokered peace talks in Kuwait hit a dead-end, with no breakthroughs. Talks were suspended and hostilities resumed.

February 27, 2016: At least 40 civilians were killed in coalition air raids in a market northeast of Sanaa.

January 28, 2016: ISIL claimed responsibility for a deadly attack outside the presidential palace in the southern city of Aden that killed at least seven people.

December 16, 2015: During UN-sponsored peace talks in Geneva, Yemen’s rival sides agreed to a mass prisoner swap. No other major breakthroughs were achieved in the talks, but both sides agreed to return to the negotiating table.

December 3, 2015: Al-Qaeda claimed to seize the Yemeni towns of Zinjibar and Jaar from pro-government forces, consolidating their grip on southern parts of the country.

November 17, 2015: Hadi returned to Aden from exile in Saudi Arabia, saying he will oversee the campaign against the Houthi rebels.

September 28, 2015: At least 131 civilians were killed in an air raid on a wedding party near the Red Sea port of al-Makha (Mocha).

September 5, 2015: In the deadliest day for Gulf coalition troops since the war began, at least 60 Emirati, Saudi and Bahraini soldiers were killed in an attack on a weapons storage depot in Maarib and other violence.

August 20, 2015: Millions of Yemenis are at risk of famine due to the ongoing conflict, said the head of the World Food Programme.

July 13, 2015: Another UN-brokered humanitarian ceasefire collapsed within hours, as clashes resumed between government and rebel forces.

June 19, 2015: UN-sponsored negotiations to end the Yemen crisis collapsed in Geneva, after representatives from Yemen’s exiled government, Houthi fighters, Saleh’s General Peoples’ Congress and other opposition groups were unable to reach an agreement.

June 18, 2015: The UN warned that millions of people were in urgent need of food and life-saving assistance in Yemen.

June 8, 2015: Houthi media reported that an air raid on the Yemeni army headquarters killed at least 44 people and left more than 100 wounded.

May 17, 2015: Houthi fighters boycotted a dialogue conference in the Saudi capital, which was attended by exiled President Hadi, Prime Minister Khaled Bahah and about 400 other delegates.

May 12, 2015: At least 69 people were killed and more than 250 others were wounded after Saudi-led coalition air raids targeted an arms depot near Sanaa. A five-day humanitarian ceasefire came into effect, but fell apart within days.

May 11, 2015: Saleh declared an alliance with the Houthi rebels after Saudi-led coalition aerial attacks targeted his home in Sanaa.

May 7, 2015: Al-Qaeda in the Arabian Peninsula said a US air raid killed senior leader Nasser bin Ali al-Ansi and several others in Mukalla.

April 28, 2015: International aid groups warned that a “humanitarian catastrophe” was unfolding in Yemen as fighting raged on between forces loyal to Hadi and Houthi rebels in Taiz and Aden.

April 23, 2015: A day after declaring an end its air campaign in Yemen, the Saudi-led coalition carried out fresh attacks in Aden, Taiz, Lahij, Ibb, Marib and Hudaida.

For key events spanning the start of the Houthi rebellion in Yemen in September 2014 until April 23, 2015, please click here. 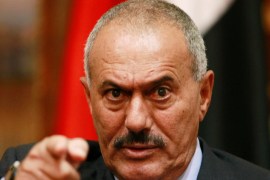 Former leader killed in grenade and gun attack, Houthis say, as death is also confirmed by Saleh’s own political party.