The son of Yemen’s former President Ali Abdullah Saleh has called for revenge against the Houthi rebels who took his father’s life.

“I will lead the battle until the last Houthi is thrown out of Yemen … the blood of my father will be hell ringing in the ears of Iran,” Ahmed Ali Saleh was quoted as saying by Saudi-owned al-Ekhbariya TV on Tuesday.

He called for his father’s backers to “take back Yemen from the Iranian Houthi militias”.

Saleh was killed in a rocket-propelled grenade and gun attack on his vehicle at a checkpoint outside Sanaa on Monday. The Houthis said that he was targeted for “treason” after he cut ties with the rebels just days earlier and indicated he was open to talks with the Saudi-led coalition, which has been leading the fight against the Houthis since 2015.

The threat came as news surfaced that Tareq Mohammed Abdullah Saleh, the former president’s nephew, was also killed during clashes with the Houthi rebels

According to Reuters, a statement from Saleh’s party on Tuesday confirmed that the senior military commander, whose fate had been unknown, was dead.

There was a tense calm in Sanaa early on Tuesday, after the Saudi-led coalition launched at least 25 overnight air strikes on the capital city.

“People are now emerging from their houses after five days being locked down basically as prisoners,” Jamie McGoldrick, the UN’s humanitarian coordinator in Yemen, said during a briefing by phone in Sanaa.

“They are now seeking safety, moving their families in case things erupt again and at the same time seeking medical treatment and trying to pacify very terrified kids who have endured five days of relentless shelling, shooting and ground fire and air strikes.”

Hakim al-Masmari, editor of the Yemen Post newspaper, told Al Jazeera that at least nine civilians were killed and many more injured in the overnight strikes.

“There’s been more than a dozen air strikes in Sanaa from midnight until the morning. Many houses have been destroyed, especially in the city centre near the presidential palace,” Masmari said.

Later in the day, thousands of Houthi supporters rallied in Sanaa, shouting “Sanaa is free and the state still stands,” according to AFP news agency.

“All means must be used to rid the Yemeni people of this nightmare,” said Ahmed Abdul Gheit, who heads the pan-Arab bloc.

Hadi called for a “new page” in the battle against the Houthis, in a speech carried live on Saudi Arabia’s Al Arabiya TV.

“Let’s put our hands together to end the control of these criminal gangs and build a new, united Yemen,” the leader of Yemen’s internationally recognised government said from Riyadh, where he lives in exile.

On Tuesday, the International Committee of the Red Cross (ICRC) said at least 234 people had been killed and more than 400 wounded in fighting in Sanaa since the beginning of the month.

“Our [ICRC Yemen] teams are now doing all they can to supply hospitals with medicines, surgical materials and fuel,” Robert Mardini, an ICRC spokesperson, said on Twitter.

Humanitarian aid organisation Doctors Without Borders (MSF) said it had evacuated patients from a hospital in the northern province of Hajja, which is under Houthi control, after it came under fire from air strikes on Sunday.

The war in Yemen, now in its second year, has left thousands dead and led to one of the world’s worst humanitarian crises. About 7 million people are facing starvation and one million people have been infected with cholera. 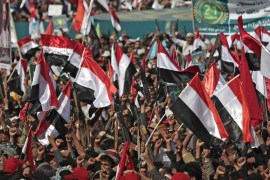 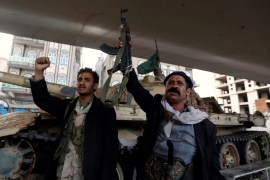 A look at how the conflict in Yemen has unfolded since September 2014, when the Houthis launched their rebellion. 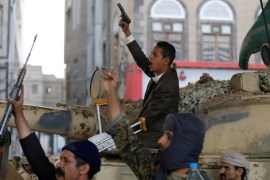 Four things you may not know about Yemen

Where did the name ‘Houthi’ come from? What do the rebels want? What is Zaidism? And what is Yemen like today? 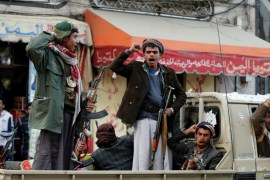 Yemen: ‘Now there will be a new level of civil war’