The vice president of Iraq has accused President Emmanuel Macron of going against France’s constitution by interfering in foreign affairs after he called on Baghdad to disband Shia militias that proved crucial in the fight against ISIL.

Macron later called on the central government in Baghdad to dissolve the powerful militias – known as Hashd al-Shaabi, or Popular Mobilization Forces (PMF) – which have now been integrated into Iraq’s military.

“France’s constitution calls for non-interference in other country’s internal affairs. We are baffled by the French president’s calls for dissolving the Hashd al-Shaabi, which is a legal and official institution in Iraq,” he said.

“We strongly reject this as interference in our domestic affairs. We reject the imposition of any other state’s will on the Iraqi government and people.”

Hashd al-Shaabi played a major role in defeating the Islamic State of Iraq and the Levant (ISIL) after the armed group took over large expanses of the country in a rapid offensive in 2014.

ISIL has now been expelled from the major cities, including Iraq’s second largest, Mosul.

“We expect the international community, especially France, to show respect for the noble warriors, many of whom have perished in Iraq for the sake of world peace,” Hammudi said in a statement on Monday.

“The Daesh [ISIL] terrorist group would have stabbed France in the heart if it hadn’t been for the Hashd al-Shaabi.”

At a joint news conference in Paris with Iraqi Kurdish leaders, including Barzani, Macron called on Saturday for the demobilisation of all militias in Iraq that fought ISIL, also known as ISIS.

“France calls for a constructive national dialogue to engage in Iraq,” Macron said.

“Having a strong, reconciled, pluralistic Iraq which recognises each of its components is a condition for the immediate and medium-term stability.”

The central government in Baghdad has been in a dispute with the KRG since it held an independence referendum that resulted in a “yes” vote in September.

Iraqi forces backed by militias responded by seizing the oil-rich Kurdish-held city of Kirkuk in October along with other disputed territory. 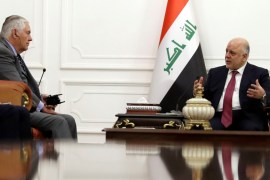 Abadi tells Tillerson: PMF is hope of Iraq and region

Iraqi PM defends role of Iran-backed militias after top US diplomat calls for them to be expelled from the country. 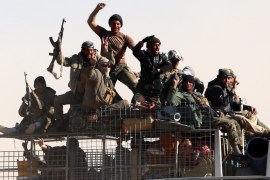 Legalising PMF in Iraq: Why it’s not all bad news

Integrating Shia militias into the Iraqi state is a good way to limit their powers and control them.