In a report on Monday, Human Rights Watch (HRW) said more than 200 former M23 fighters were mobilised, during country-wide protests that erupted after Kabila refused to step down at the end of his term.

The accusations come amid renewed fears that DRC could witness a repeat of violence, as Kabila has delayed a new vote until December 2018.

Ida Sawyer, Central Africa director at HRW, said the government’s covert operations to recruit fighters “from an abusive armed group to suppress any resistance show how far President Kabila and his coterie are willing to go to stay in power”.

HRW said its findings were based on more than 120 interviews, including 21 M23 fighters, commanders and political leaders.

‘Explicit orders to use lethal force’

The mainly Tutsi ethnic group was the largest of dozens of armed groups in eastern Congo, until its defeat by Congolese and UN forces in November 2013. Hundreds of fighters fled, taking refuge in Rwanda and Uganda.

Many live in military camps there, awaiting amnesties promised under a peace deal.

Between October and December 2016, as protests against Kabila escalated, senior Congolese officers drafted the former rebels, gave them new uniforms and weapons and deployed them to Congo’s main cities, Kinshasa, Lubumbashi, and Goma.

“To protect the president and quash protests, the M23 fighters were given explicit orders to use lethal force, including at ‘point-blank range’ if necessary,” HRW said.

The rights group renewed calls on the international community for “sustained, targeted and well-coordinated pressure” on Kabila to step down and allow for credible and peaceful elections.

According to the constitution, Kabila cannot seek a third term.

MONUSCO statement comes on the eve of expected anti-government demonstrations called by opposition and rights groups. 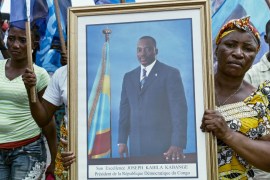 President Joseph Kabila, who has ruled for 16 years, is unable to seek third term in office under constitution.