With both Apple and Samsung releasing their latest smartphone before the Christmas shopping season, Al Jazeera looks at the similarities between the two devices.

Apple’s latest smartphone, the iPhone X, was released in November for an entry-level price of $1000.

Samsung released its Note 8 smartphone in September, for a little over $900. But just how similar is the iPhone X to its Android rival?

Screen made by Samsung

Apple's new iPhone X is priced at almost $1,000. How does that compare to average monthly salaries across the world? https://t.co/2fzvIKOyUi pic.twitter.com/L6jqXKa9nj 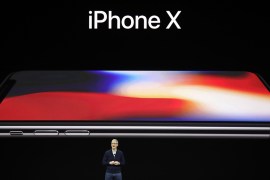 Who can afford an iPhone X?

Apple’s new iPhone X is priced at almost $1,000. But how does that compare to average monthly salaries across the world?