Turkey has accused the United Arab Emirates of spreading divisive propaganda after its foreign minister retweeted a post denouncing President Recep Tayyip Erdogan‘s “ancestors” for their treatment of Arabs during the Ottoman Empire.

Abdullah bin Zayed Al Nahyan, UAE foreign minister, had shared on Twitter a post that accused Fahreddin Pasha – an Ottoman governor of Medina from 1916-1919 – of committing crimes against the local population, including stealing their property.

“These are Erdogan’s ancestors and their past with the Arabs,” it said.

The Turkish newspaper Daily Sabah quoted presidential spokesman Ibrahim Kalin taking Nahyan to task for the retweet, accusing him of a “propaganda lie that seeks to turn Turks [and] Arabs against one another”.

“It was Fahreddin Pasha who bravely defended Medina against the British plans then. Is attacking President Erdogan at all costs the new fashion now?” Kalin asked.

The pro-government paper noted the UAE “has been accused of supporting plots in Turkey against the Turkish government, as well as Ankara’s role in the broader region”.

Turkey has come to the aid of Qatar after an Arab quartet – Saudi Arabia, UAE, Bahrain, and Egypt – imposed a blockade on Qatar on June 5 after accusing it of supporting “extremism” and their regional rival Iran.

Qatar has vehemently denied all allegations.

Turkey has built a military base in Qatar and deployed soldiers there, as well as supporting the Arab Gulf state with necessary products blocked from entering by the four countries. 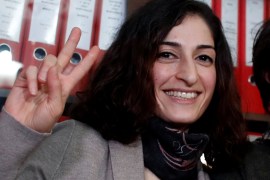 Court orders Mesale Tolu, who is accused of ‘terror’ charges, to stay in Turkey and register with police once a week. 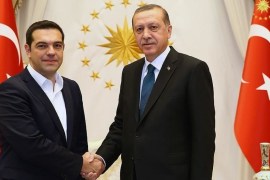 Turkey, Greece and the era of ‘Cold Peace’