Tropical Storm Kai-Tak made landfall over Policarpio in eastern Samar on Saturday, according to the Philippines‘ national weather authority Pagasa.

In the Municipality of Taft, days of rain have left many homes under chest-deep water, displacing at least 1,800 families.

Winds have been as high as 100 kilometres per hour and waves have been measured at over four metres, but the most significant aspect of this tropical storm is the persistent and heavy rain.

Satellite measurements have suggested rainfall of 143mm per hour from a few of the most intense thunderstorms generated ahead of Kai-Tak.

With sea temperatures of 29C it has plenty of energy to draw on, but it is unlikely to grow into a monster cyclone because its top is being constantly sliced off by strong winds higher up in the atmosphere.

Some of the reported rainfall totals seem extraordinary, but possible. Borongan on the east coast of Samar has collected 801mm in four days.

The flooding in Taft, which is up the coast from Borongan, would suggest this to be realistic. It is no surprise that this exceeds the average rainfall in Borongan for the whole of December by at least 100mm.

Kai-Tak is trudging slowly westwards and will take two days before emerging over the southern Mindoro Strait.

Forecast models predict that another 350mm of rain is still possible, in the face of the centre of the cyclone. Rain stops within a few hours of the passage of Kai-Tak. 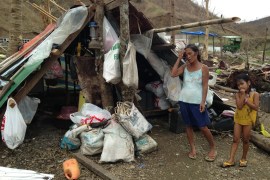 Filipinos struggle to recover from Haiyan

Despite millions of dollars in aid, experts say it would take at least three years for typhoon-hit areas to recover. 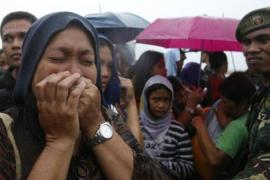 Did climate change cause Typhoon Haiyan?

Filipino officials say global warming was responsible for the storm, but many scientists say it’s too early to tell.