Here are the latest developments on the tensions with North Korea:

UK: ‘Military option must remain on the table’

Abe and Trump to raise pressure

No talks over nuclear programme

Nuclear war may break out at ‘any moment’

‘Don’t join any US action and you’re safe’

Trump: ‘Only one thing will work’

Pyongyang: All options on the table for leadership

North Korea: ‘More gift packages’ coming for the US

US calls for UN vote on fresh North Korea sanctions

Japan FM agrees with US on ‘close cooperation’ over N Korea

Trump reaffirms commitment to defend allies in call with Abe

US: Threats ‘will be met with massive military response’

Trump: US may stop trade with countries doing business with N Korea

The United States is considering, in addition to other options, stopping all trade with any country doing business with North Korea.

North Korea says it has a missile-ready hydrogen bomb

Moon: There will not be war

UN: Time to ‘dial down rhetoric’

‘Nothing imminent’ in standoff with N Korea

‘Tension could lead to catastrophe’

US Defence Secretary James Mattis has responded to North Korea’s threat of targeting the US Pacific territory of Guam with missiles, saying Pyongyang’s move would lead to “the end of its regime and the destruction of its people”.

Mattis said in a statement on Wednesday that North Korea “would lose any arms race or conflict it initiates”. 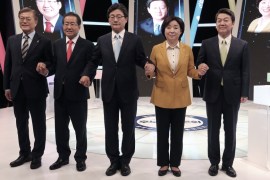