A strong supporter of the Palestinian cause, Erdogan hosted an extraordinary meeting on Wednesday in Istanbul, under the auspices of the Organization of Islamic Cooperation (OIC).

Before the OIC Jerusalem summit, Erdogan had threatened to cut diplomatic ties with Israel, “if necessary”. He had also said that the summit would be a “turning point”.

At the summit however, Erdogan did not expand on his earlier threat, and instead reaffirmed the illegality of the US decision: “It is null and void … no country in the world has supported [it]”.

The statements have not impressed Israel.

Here is a round-up of what Turkey’s president has been saying about Jerusalem in recent days, and a look at his country’s ties with Israel.

The ones who made Jerusalem a dungeon for Muslims and members of other religions will never be able to clean the blood from their hands.

‘Jerusalem is a red line’

Erdogan: Israel is a terrorist state 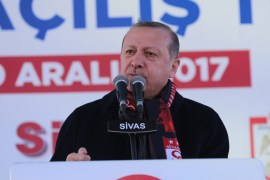 Turkish president denounces Israel’s actions in Palestine as ‘racist’ and reminiscent of apartheid in South Africa. 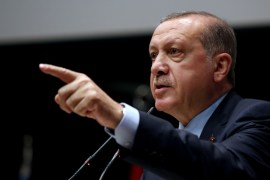