A senior UN official has called for parties involved in the war in Yemen to allow “sustained and unimpeded humanitarian access” for the millions of Yemenis facing famine and battling disease.

“The lives of millions of people, including 8.4 million Yemenis who are a step away from famine, hinge on our ability to continue our operations and to provide health, safe water, shelter and nutrition support,” Jamie McGoldrick, the UN’s humanitarian coordinator for Yemen, said in a statement on Monday.

The call comes as the Saudi-led coalition continues a blockade of Yemen, which began in October after it shut down the country’s borders in response to a rebel missile that was shot down near the capital, Riyadh.

Amid mounting international pressure, Saudi Arabia began to allow some humanitarian aid to enter the country in the last week of November.

Despite this easing, the situation in Yemen remains severe, according to McGoldrick.

“The continuing blockade of ports is limiting supplies of fuel, food and medicines, dramatically increasing the number of vulnerable people who need help,” he said.

The blockade was designed to cut off the alleged supply of weapons to Houthi rebels from Iran but has exacerbated what the UN has called the world’s worst humanitarian crisis.

Aid organisations in Yemen faced further difficulties when renewed violence broke out in the capital, Sanaa, after the killing of former President Ali Abdullah Saleh on December 4.

The conflict has killed more than 10,000 people and displaced three million, according to the UN.

Millions of Yemenis are struggling with hunger and disease, including the worst cholera epidemic on record, which has infected about one million people.

Saudi Arabia and its allies intervened in neighbouring Yemen in March 2015 in an attempt to push back the Houthi rebels, who are said to be backed by Iran, and restore the government of President Abd-Rabbu Mansour Hadi. 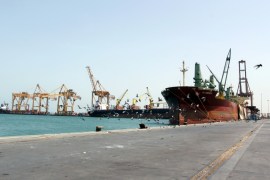 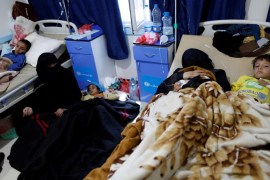